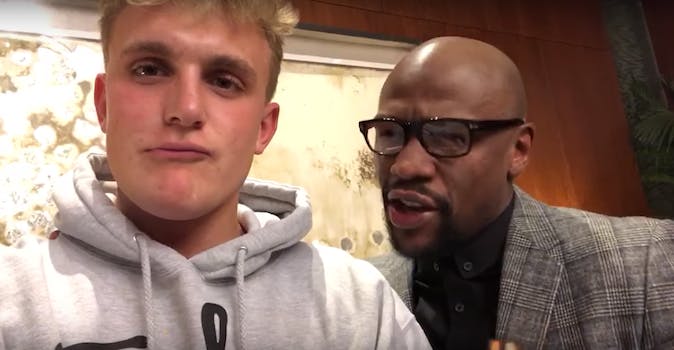 Paul wants the YouTube boxing belt, but its rightful owner is not budging.

Jake Paul still wants a crack at the YouTube Boxing Championship belt, and he’s brought in Floyd Mayweather to help.

The YouTube prankster has been in a month-long feud with fellow YouTuber KSI, resulting in a jabber-jawed back and forth about a proposed public match. And so this weekend Paul hung out with the most decorated fighter of his generation for emotional support. Whether they box or engage in mixed martial arts like Paul wants, the message is clear.

“It could be a boxing match, it could be an MMA fight, but it doesn’t matter—it’s a fight,” Mayweather said on Paul’s video. “I got your back. I’m going to train you. I’m going to help you with certain skills you need to know.”

Mayweather also said that Paul was now on the Money Team, his boxing promotional label, though that seemed to be an unofficial union. He also said he’d manage the popular 21-year-old YouTuber.

The clip is from a video uploaded over the weekend in which Paul celebrates 500 days of vlogging by trashing one of his cars. Given that KSI’s all-YouTuber fight was a sold-out spectacle in England last month, Mayweather and Paul’s challenge surely factors in how lucrative the KSI-versus-Paul spectacle can be in the States—the two social media stars have more than 30 million combined YouTube followers.

“Man up, accept my compromise,” Paul said. “I hate that I had to get the big dogs involved for you to realize how big this could be.”

KSI doesn’t seem to be biting. He’s publicly said the Paul fight won’t happen, and on Monday uploaded a video titled “My next boxing opponent” where he lays out six YouTuber challengers and asks fans to vote for the opponent. Paul is not among them. He also laughed off the union of Paul and Mayweather on Twitter.

Gets Floyd as his trainer, and still wants MMA? Smh, get the fuck outta here… https://t.co/4W9OefEa5Z

For his part, Jake’s brother Logan, who was infamously cut off from YouTube’s ad network on Feb. 9 amid behavioral issues, is back to posting comedy videos on his channel. This week he gave Jake a belated birthday present: a Logan Paul hoodie, and a painting of Jake imagined as a shirtless angel.