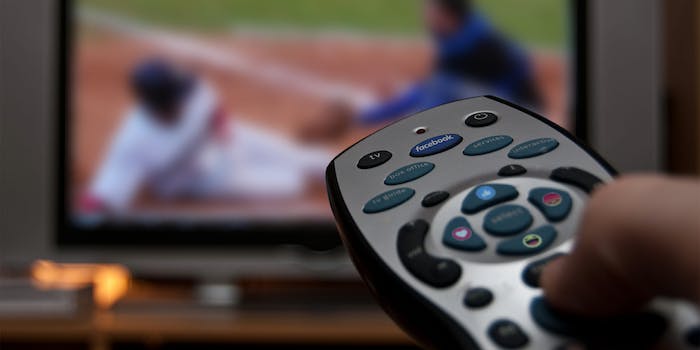 For several years now, Major League Baseball has been battling with something of an identity crisis. Robert Manfred, its present commissioner, has been trying to update the game to make it faster and sexier for a younger generation of fans. While commentators have been intermittently forecasting its “death” in the face of limp TV ratings, Manfred negotiated for the no-pitch walk, a semi-notable rule change for the 2017 season. While that might suggest that MLB is suffering from a lack of viable ideas on how to reform itself, an unlikely source of help has just arrived on the scene: Facebook.

Watch is Facebook’s newly announced platform for original shows and live streams. While it will be of particular interest to baseball, it will also be of similarly momentous relevance to the medium some suspect it’s aiming to replace—TV. That’s because, in striving to transform television into a uniquely social activity, one in which friends and groups can relentlessly comment on the shows they’re watching, Facebook will be effectively morphing itself and its 2 billion users into one giant, always-on TV focus group. It will allow fans to use the familiar Facebook emoji to record their reactions to programs, it will group shows according to what a user is most likely to be interested in, and it will also list them according to which are most popular among a user’s friends (i.e. among particular demographics). And in so doing, it will furnish the television industry with a massive explosion in viewing intelligence, leading to a radical overhaul in how producers and creators decide which shows to make and how to make them.

To be frank, television has been waiting for something like Watch all its life. For years the industry struggled with its love-hate reliance on the traditional focus group, which, despite the occasional insights, can lead production companies and networks down blind alleys. Possibly the most famous example occurred in 1989, when NBC was convinced by test audiences to throw its full backing behind a sitcom about a nun called Sister Kate, and to hold off picking up a show whose pilot garnered more lukewarm responses from its assembled audience. That less promising show happened to be called Seinfeld, and the fact that it went on to become one of the most successful TV series of all time underlines how dangerous focus groups and test audiences can be when used in isolation, without follow-up studies to substantiate and hone the conclusions gleaned from them.

Watch will do away with this danger. In transforming Facebook’s userbase into a massive and ceaseless test audience, it will be able to provide TV producers not only with vastly more viewing data but with data that’s constantly being updated and refined over time. By allowing users to form groups around their favorite series, for example, it will enable production companies to measure with far greater accuracy how well a show will do and is doing. And given that Facebook boasts some 1.9 billion more global users than either Netflix or Amazon Video, it will be able to perform a far more comprehensive job of predicting a show’s fortunes than the two video-on-demand companies.

What’s key to Watch’s potential is that, in enabling viewers to respond to videos and video segments with a “Haha,” “Love” or “Angry” reaction, it perfectly replicates that archetypal ability of focus group members to turn a dial whenever they want to register their liking or disliking for something that happens during a show. However, beyond simply allowing Facebook to reproduce the function of old-fashioned test audiences, this ability will prove something of a game-changer for TV and how it gets made. In combination with the far greater numbers of viewers, and with the fact that masses of view comments will be constantly fed into the system, television will become far more responsive to the preferences of its viewers. Shows will be updated on the hoof according to what audiences like and don’t like about them, and the audience will arguably be given more of what it wants, when it wants it.

And this is where Major League Baseball comes back into the picture. In entertaining a number of revamps to make the game more attractive to a wider general public over the past few years, Commissioner Manfred and his allies have been relying on traditional research avenues such as the focus group, something which potentially explains the slow rate of evolution witnessed by baseball. It’s therefore little surprise that one of the initial parties to sign up to produce original programming on Watch is indeed MLB, which will be broadcasting one live game per week. It’s therefore very easy to imagine that the league will be using these broadcasts as a laboratory to test new rule changes and see just how popular they really are, with the results being validated (or not) by thousands of people leaving their comments in response to the no-pitch walk, for instance.

Of course, purists may be aghast at the thought of MLB imposing or sticking with rule changes just because certain live broadcasts ended up in Watch’s “Most Talked About” section, yet the sheer breadth of Facebook’s user base would at least mean that it provides a more dependable basis for bringing in changes than a few test audiences or surveys. That said, as powerful as Watch will be as a mega-focus group, there’s a danger that the inherently social aspect of Facebook could skew the reactions of viewers, who, knowing they’re on display to all their friends, may be less willing to reveal what they really think about a program or televised event. Given that there is some evidence of social media causing greater conformity among people, this might suggest that Watch could lead to television becoming more homogenized.

This is something producers will undoubtedly have to look out for when using the immense viewing data Watch will yield to them, but there’s little doubt that in the huge scale and ceaselessness of this data, the humble focus group may be in danger of becoming extinct.