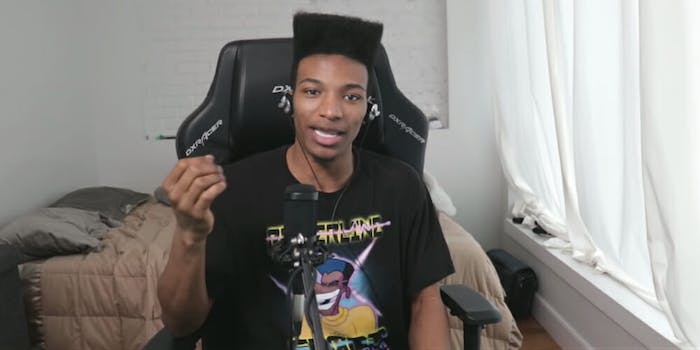 Etika left suicidal messages in a YouTube video before he went missing.

Missing YouTuber Etika’s personal belongings have been found alongside Manhattan Bridge in New York City, according to the New York Post.

Police have reportedly been searching for Etika, whose real name is Daniel Desmond Amofah, ever since he went missing on Wednesday night. The police were canvassing the bridge on Wednesday, the same day he was last heard from, and found several of his belongings: Etika’s wallet, his New York State driver’s license, other cards, his cellphone, and Nintendo Switch. Police also found what they presume to be his laptop bag, which contained a pair of boxers, a shirt, shorts, and headphones.

Etika went missing right after he made an 8-minute long video, which consisted of suicidal messages. The video, which has since been removed, was titled, “I’m sorry.” In it, he said the world would be better off without him.

The video was made during the day, as it was daytime in the video. Yet, he scheduled the upload for Thursday at midnight–after he went missing.

He also spoke about his mental health issues and how social media “consumed” him.

In his video description, Etika wrote, “God… I’m so sorry I hurt you all so badly. I’m so sorry I betrayed you all. I mislead so many of you, I manipulated, I lied, I shifted blame… I don’t know what awaits me on the other side, but I’m ready to face it. As far as we know, there is no life after death. My time ends now, but if there is a way for me too, I’ll send you all as many blessings as I can from the other side.”

Alice Pika, one of Etika’s friends, urged everyone to remain calm following the news.

“Just because they found Etika’s personal belongings DOES NOT mean they found his body. I am 3000% NOT surprised he threw all of his things away,” Pika wrote on Twitter.