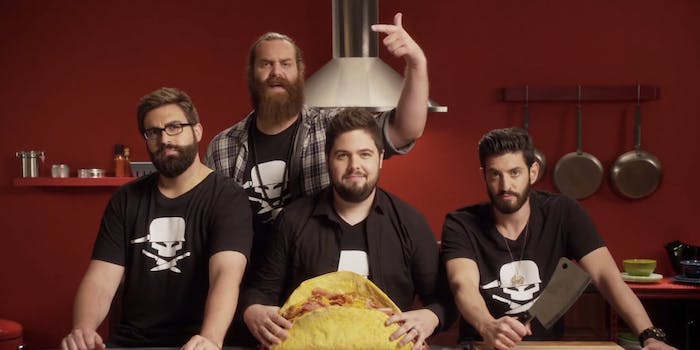 The four-year adventure of gastronomical gluttony has a new home.

EMT, which can be best described as somewhat civilized food fight, may not be the place to go to learn the nuances of creating a soufflé, but if you’re looking to build a lasagna out of cheeseburgers and onion rings, you are on target. Founded in 2010, EMT has 700 million views under its belt and can lay claim to 6.4 million YouTube subscribers who are faithful fans of the weekly series.

In the course of its four-year adventure of gastronomical gluttony, the show has flirted with TV distribution via Revision 3 and G4 and has a deal in the works with a Japanese production company to create a localized version of the show. The FYI deal will allow it to reach the network’s 70 million homes in a format that expands the show from below 10 minutes (for the most part) to a half-hour.

The pilot episode focuses on the team’s mission to bring food fun to an elementary school classroom. Needless to say, the resulting food “creation” is received with shrieks of delight from the younguns whose natural reaction to a creature-like foodstuff that includes tater tots and grilled cheese, is joyously captured.

The final days before cable launch are hectic, but EME creator and host Morenstein took the time to answer a few questions for the Daily Dot about their origin story, making the jump to television, and what’s coming next.

At what point did you realize you had something special on your hands given the concept started as something serendipitous (eating a burger with Terminator playing in the background)?

It wasn’t entirely serendipitous. I had reserved the Epic Meal Time name. After I watched the first episode, I thought it could be something that people could really enjoy.

Josh and Ameer are team cuisine. They do a lot of the legwork for us. Say we’re making pancake lasagna. They’ll make the bacon pancakes and really get things ready. And then we have Dave for pre-production.

Yes, I know you like bacon. What is your least favorite food?

Do you fear you will lose any of your cachet by moving from online to cable television?

We will not be abandoning online. I’ve seen people do that, and I won’t. A lot of people don’t watch TV, and it would be a slight to our fan base to abandon YouTube. Our fan base gave us the opportunity to have a TV show!

Will you ever cook anything healthy?

I don’t know, but on Epic Meal Empire, we cooked for a yoga studio and made something vegan. That was quite interesting.

Have you ever tried having a celebrity chef as a guest?

Fabio Viviani and I have a throw down on Epic Meal Empire.

Correction: An earlier version of this story misstated the runtime for the Epic Meal Empire show.