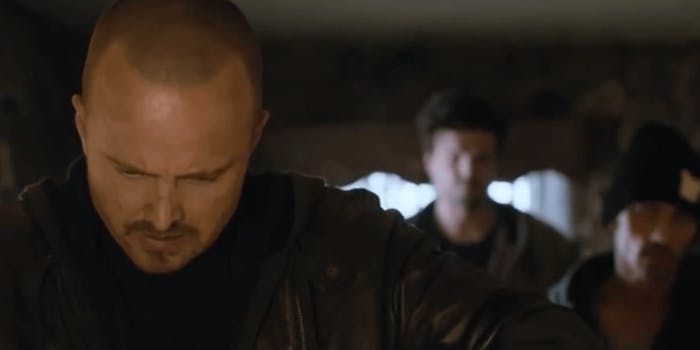 It's an impressive figure.

El Camino, which was released for streaming and a limited theater run on Oct. 11, accumulated nearly 8.2 million unique viewers. The Breaking Bad spinoff film saw its largest audience on the first 24 hours with 2.6 million U.S. viewers, with 1.08 million viewers on opening day.

According to a Nielsen report, roughly 36% of the audience over its first three days fit into the ages 18-34 demographic.

It’s a strong showing by most measures. However, Netflix often disputes Nielsen’s ratings because they only count TV viewership and U.S. audiences. If by the rare chance, Netflix shows its hand with data, the streaming platform typically presents worldwide calculations.

According to the Hollywood Reporter, in the week leading up to El Camino’s release, the average audience for Breaking Bad on Netflix was 153,000 viewers. The series averaged 62,000 viewers during the three weeks prior.

El Camino continues the story of Jesse Pinkman (Aaron Paul) immediately after the season finale of the beloved AMC series Breaking Bad. The critically acclaimed film delivers closure for his character but also leaves much for the show’s fans to chew on.

Breaking Bad creator and El Camino director Vince Gilligan told Entertainment Weekly he doesn’t want to “overstay [his] welcome” and that “the next thing I intend to do is something completely different.” However, he says if in the future, if he’s working and “everyone still wants it, it’d be interesting to see what Alaska still looks like 10 years later, 15 years later.”