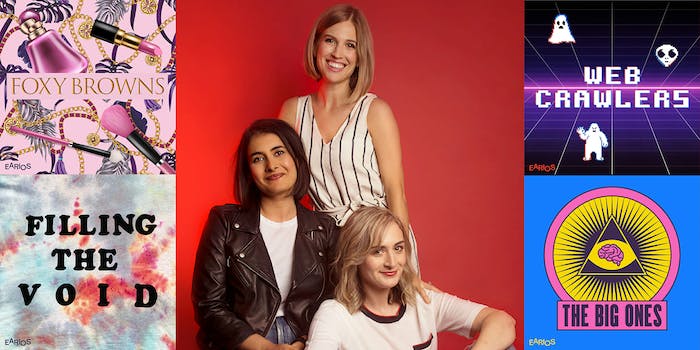 In 2019, everyone should be able to see themselves in the media they consume—podcasting included.

Unsurprisingly, nearly 50% of podcast listeners are women, yet women only make up about 22% of these show’s hosts, according to Podcast Business Journal. This is out of over 700,000 podcasts listed in the Apple podcast directory. Luckily, several organizations have dedicated themselves to bringing male and female parity to this medium.

Enter Earios, a new podcast network founded by women for everyone. Partnering with Acast, the network debuts Monday with three new shows from Lesley Arfin (creator of Netflix’s Love), Camilla Blackett (writer on The Newsroom, New Girl, Fresh Off the Boat), and Melissa Stetten and Ali Segel with plans for more to roll out this summer including shows from comedian Margaret Cho and musician Feist.

“If we had known about some of those [companies] we maybe wouldn’t have done this,” Earios co-founder Amanda Lund told the Daily Dot. “Maybe they would have greenlit The Big Ones and we would just be on vacation right now.”

Lund is referring to a show her and fellow Earios co-founder Maria Blasucci were pitching to podcast networks last year. As they were shopping the show, they realized that few networks were actually founded by women even though 30% of shows were hosted by women. They decided to change that by creating their own shop. To be fair to the above list, at least some of the podcast networks didn’t exist a year ago, which is one indication that the industry is making strides toward creating a more inclusive and diverse landscape.

“Nearly all of the networks that host, develop, and promote popular shows are run by men. So a lot of content pitched by women is not bought or promoted. We wanted to make it easier for women to share their ideas with a like-minded community,” says Priyanka Mattoo, the third Earios co-founder, in a press release.

Earios was founded by the three in Los Angeles. Lund and Blasucci have backgrounds in writing, acting, and podcasting, while Mattoo is a former producer-agent and current writer and director. The company announced itself to the world with a successful Kickstarter nearly a year ago, garnering almost 500 pledges of support.

The network will cover topics from comedy and news to lifestyle, entertainment, and sex. As an agent at UTA and WME, Mattoo worked with talent including Ellie Kemper and Kumail Nanjiani and eventually left representation to partner with Jack Black at their production company, Electric Dynamite. Blasucci held roles on HBO’s Family Tree and Yahoo! Screen’s Ghost Girls and was an associate producer on the film Neighbors 2: Sorority Rising. She stars in the Comedy Central series Drunk History. Lund has appeared in Fresh Off the Boat, New Girl, Brooklyn 99, and Parenthood. She was also an associate producer on Neighbors 2: Sorority Rising.

Based on the talent the group has procured for the network, it’s clear that it’s well-connected and trusted by many to do great work. It also helps that the mission statement is clear.

“There’s a podcast out there for everyone, but nearly all of the networks that host, develop, and promote your favorite shows are run by men,” says the Kickstarter campaign page. “Are we going to let this beautiful medium that will shape culture for generations to come go the way of literally everything else, and become a boys club? Hell. No. That’s why we are creating Earios: A podcast network run by women. For everyone. No creeps allowed.”

The idea struck a chord among their supporters, but it also led to outreach from businesses of all different stripes. “We had a lot of interest from a variety of investors when the Kickstarter was announced. We had everyone from tech people to VCs to old-time media companies calling with different iterations of what a deal would be to fund us,” Mattoo said. “Acast had reached out pretty early and we really vibed with a bunch of the women who work there, and so we kind of trusted our guts and went with them, and they’ve been lovely so far.”

It speaks volumes to the reputations of Lund, Blasucci, and Mattoo that they were able to put together this network with such high-profile partnerships and top-tier talent. Now comes the fun part.

Jeff Umbro runs the Podglomerate, a podcast network, and production company, and hosts his own podcast interviewing creatives about the one story they’ve always struggled to tell. Follow him on Twitter.