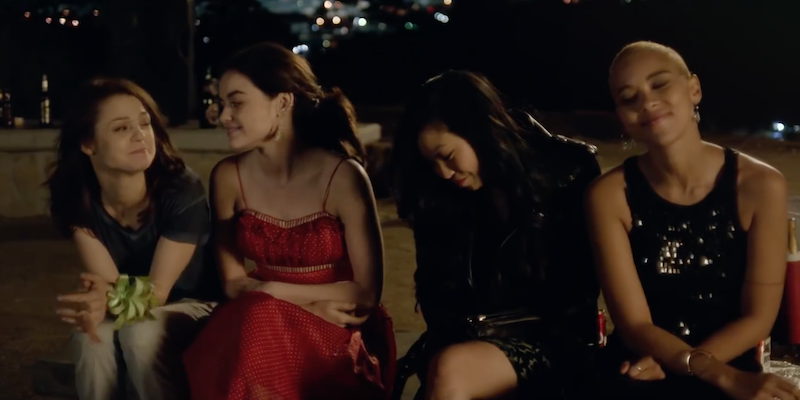 Don’t be fooled, Netflix’s ‘Dude’ is so much more than a stoner comedy

The progressive comedy swings for the fences.

Dude arrives at a particularly good time for comedies about young women and a particularly bad time for original movies on Netflix. As the success of films like Blockers and Neighbors 2 demonstrates, audiences are ready for comedies with more complex female characters, that have more progressive notions about sexuality. Meanwhile, Netflix is pumping out what feels like a nonstop stream of original content. In between these two realities, Dude is given the difficult task of carving out a niche for itself.

Dude was co-written and directed by Olivia Milch, daughter of Deadwood and NYPD Blue creator David Milch, basically making her screenwriting royalty. She also co-wrote the highly anticipated Ocean’s 8 and has already become one of the hottest up-and-coming scribes in Hollywood. The story of four friends attempting to navigate their changing lives in the weeks leading up to high school graduation, the film has essentially been billed as a stoner comedy, with Netflix dropping it intentionally on 4/20. While there is a lot of pot-smoking in the movie, there’s a lot more going on too. If anything, Dude is a coming-of-age dramedy, containing some very funny moments but also a few very serious ones. In other words, a female Superbad this ain’t.

As an indication of things to come in Milch’s career, Dude shows promise. Remember, not only did she pen the script here, she also stepped behind the camera. For her first feature, the results aren’t bad. If the screenplay were just a little bit tighter, the difference in quality might be huge. Milch also doesn’t seem completely confident in her choices as a filmmaker, waffling in tone from scene to scene. By the time she goes for an elaborate tracking shot at the end, the effort is appreciated, but the effect is kind of awkward.

The film stars Lucy Hale, Kathryn Prescott, Alexandra Shipp, and Awkwafina as the central friend group, along with a supporting cast full of familiar faces like Michaela Watkins, Jack McBrayer, and Alex Wolff. Hale, of Pretty Little Liars and the recent Truth or Dare, serves as the lead and does what she can to make an unrealistic character seem more believable: As Lily, the type A student-body president and valedictorian who’s also an athlete and a very chill stoner girl, she’s got too much on her plate.

Prescott (Skins, To the Bone, Reign) is also very good as Chloe, a character getting over a major loss. While Lily is given too much that defines her, Chloe is not given enough, but Hale and Prescott have chemistry together that makes their characters work. The other set of besties is Rebecca and Amelia, played respectively by Awkwafina and Shipp. Awkwafina, a rapper and actor who teamed up with Milch again for Ocean’s 8, pops every time she’s on-screen. Shipp, who’s appeared in hits like Love, Simon, and Straight Outta Compton, as well as playing young Storm in the recent X-Men films, gets the shortest end of the stick as Amelia, a fiery, boy-crazy character with good lines but another weak backstory.

There are two moments in Dude where Milch really struggles to merge the darkness in her narrative with the lighter elements of the story. The first involves the loss of a major character early on, in a twist which feels both heavily telegraphed and somewhat tossed aside. The second is an act of sexual assault, painfully casual and sudden.

Milch should be commended for trying to pull off something so complicated. However, she doesn’t have the skills yet to slide back and forth on this emotional scale. It’s strange that while several characters go through serious trauma another embarks on a relationship with her teacher which the film treats as cute and sweet. Is that scenario even possible, given the context? It makes for a jarring subplot all the same.

Yet some details feel wonderfully authentic. A casual hookup which leads to a mutual exchange of oral sex ends up being one of the better love scenes I’ve seen all year, depicting a version of female sexuality that male writers don’t pull off. It’s often said that directing is mostly tone management, and while Milch creates a fascinating spectrum here, I can’t help but wonder if the movie would have been more successful if she had just decided to make a straightforward comedy and left the sadder touches out entirely.

But Dude still manages to be a fun watch, sadness and all. Every indication is that Milch is an ambitious young talent, and if she can refine the sensibility she’s practicing here, you’re likely to see her name again and again in years to come.