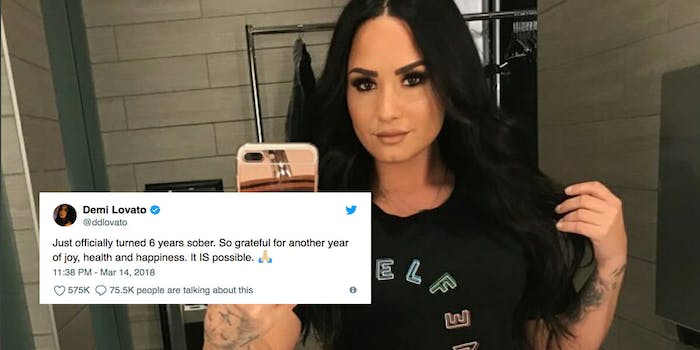 Demi Lovato opens up about relapse on new single ‘Sober’

The song is an apology to family and fans.

After six years, ex-Disney star Demi Lovato has opened up about breaking her sobriety in her newly released song “Sober,” Nylon reports. The song released Thursday morning is an emotional apology to family and fans who have supported her throughout her journey. She announced the song on social media, describing it as “my truth.”

Although Lovato has been notably transparent about her struggles with drug and alcohol addiction in the past, the news came by surprise as the pop singer tweeted in March that she was celebrating six years of sobriety. “So grateful for another year of joy, health, and happiness,” she wrote at the time. “It IS possible.”

She opens the song by saying “I got no excuses, for all of these goodbyes.” She continues, “Call me when it’s over, ’cause I’m dying inside.”

Throughout the new track, Demi addresses feelings of disappointment in herself, guilt for letting her fans down, and hope as she looks to the future promising to seek help.

“I’m sorry that I’m here again, I promise I’ll get help,” she sings on the outro. “It wasn’t my intention, I’m sorry to myself.”

On Twitter, fans wrote messages of support and encouragement for Lovato.

Sober has a different meaning for everyone. Admitting that you need help, IS OKAY. Relapse is a part of recovery. It’s okay to not be okay. #Sober @ddlovato

do yall even understand how much courage it takes to admit that uve relapsed after being sober for so long with millions of people? im so proud of demi. im glad shes getting the help she needs. shes so fucking admirable & strong. #sober @ddlovato

In previous years, Lovato has been forward with fans about her struggles with bipolar disorder, an eating disorder, cocaine, alcohol, and prescription drug addictions. Her 2012 documentary Demi Lovato: Stay Strong released in 2012 and 2017 YouTube film Demi Lovato: Simply Complicated both chart those battles intimately.

“Sober” is the lead single to appear on Lovato’s forthcoming seventh studio album, according to Genius. The official release date and album title have yet to be announced.