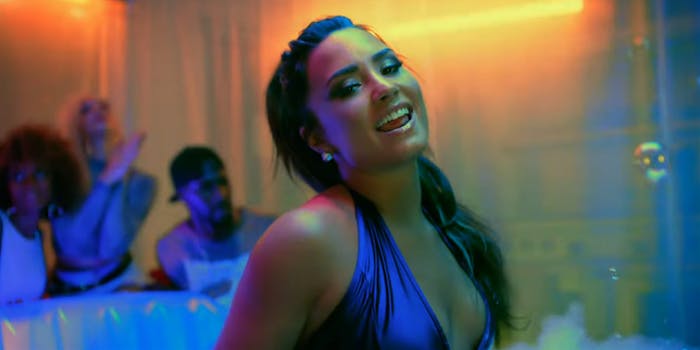 Many stooped low, using Lovato's past addiction issues to criticize her.

On Sunday night, it was announced that 21 Savage, the rapper behind the hit “Bank Account” who claimed he was from Atlanta, had been detained by Immigration and Customs Enforcement (ICE) in the Georgia city and was facing the possibility of being deported back to the U.K. Officials say 21 Savage, real name Sha Yaa Bin Abraham-Joseph, entered the U.S. legally in 2005 but has been here on an expired visa since 2006.

21 Savage memes, which were already a part of the internet ecosystem, started circulating, and Lovato tweeted that “So far 21 Savage memes have been my favorite part of the Super Bowl.” She later clarified that she was not making light of the arrest; she was laughing at a meme about 21 Savage writing with a feather plume, because he is apparently British.

Still, the backlash started rolling in, and many used Lovato’s issues with drug addiction to criticize her, stooping to an unrelated low. Lovato has struggled with addiction in the past and was hospitalized last summer for an apparent overdose. Others encouraged Lovato to start using drugs again or called her a “crackhead.”

Lovato ultimately deactivated her account because of the meme backlash and harsh tweets. Tomi Lahren, meanwhile, apparently thought the arrest was hilarious and tweeted out this bad joke using lyrics from “Bank Account.” Cardi B promptly jingled her leash, after a previous feud with the conservative talking head.

Don’t make me get my leash https://t.co/ErQ2RhzDeg

The incident even became its own meme.

On her Instagram stories, Lovato again clarified that she was laughing at the British memes and not 21 Savage’s deportation, saying, “Sorry if I offended anyone. But it’s no excuse to laugh at someone’s addiction let alone their OD.”

If you are dealing with drug addiction and would like more information, contact the Substance Abuse and Mental Health Services Administration at 1-800-622-HELP.