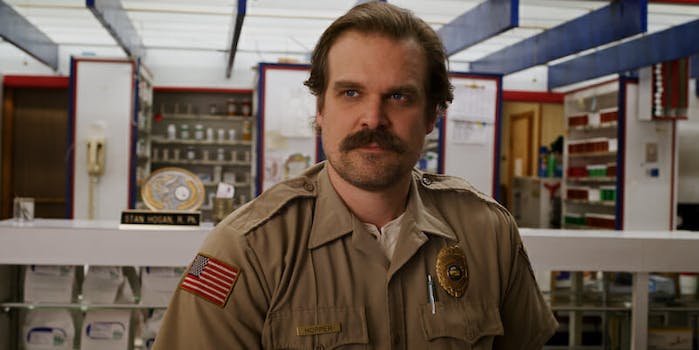 Also, who knew Pete Davidson lived in the Upside Down?

David Harbour began his appearance on Saturday Night Live with a monologue, letting us know he can do way more acting-wise than just play Chief Jim Hopper on Netflix’s  Stranger Things.

Still, the show’s Upside Down was part of most of his opener—and he even teased his character’s status after a dramatic season 3 finish, where we see that Hopper seemingly died.

So is this officially the end of Harbour’s run on the show? We’re still torn.

Fast-forward to last night’s appearance, and we’re still getting teased about Hopper’s fate. Saturday night, the show’s halls opened a portal to its version of the Upside Down. When Pete Davidson–who, apparently, has just been hanging out with the Demogorgons all this time–asks if Hopper is alive at the end of the latest season, Harbour quips, “Yeah, no.”

He smiles. “Just watch the show, you’ll find out next season,” he says.

True to SNL fashion, the rest of the sketch was peppered with quality comedy. From the Davidson cameo and a Barb reference (the fan-favorite character died in season 1) to Kenan Thompson running SNL in an alternate universe, we were not disappointed overall.

Fans, meanwhile, are not-so-secretly hoping this is all part of a larger promo effort for season 4, but we’re on the edge of our seats to see what happens to Hopper.

It appears Harbour is curious to know that information as well. During a recent episode of Late Night With Seth Meyers, he initiated a FaceTime call to show creators Matt and Ross Duffer on-air to ask about his character’s fate.

“Am I dead? Is Hopper dead?” Harbour asks.

“I mean, we’re still figuring it out, David,” one of the brothers responded.