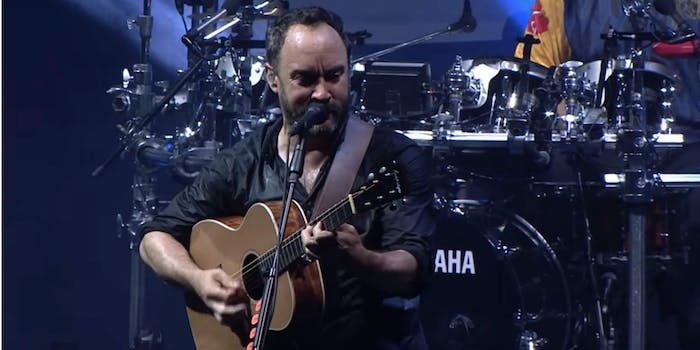 What would you say?

The snub drama continues: This year’s inductees into the Rock and Roll Hall of Fame were announced today, but Dave Matthews Band fans are piping hot over the group’s exclusion—despite winning the fan vote.

Voting on the fan ballot ended on Jan. 10 with DMB coming in first, followed by Pat Benatar, the Doobie Brothers, Soundgarden, and Judas Priest. The Rock Hall’s fan voting started in 2012, and since then the winner of the vote has always been inducted. Until now. And, as Vulture details, the fan ballot is counted as one ballot, and then voted on by the larger Rock Hall body.

Congratulations to our fellow nominees that will be inducted into the @rockhall in 2020. We want to express gratitude for all of our amazing fans and their support. We reached over a million fan votes! Thank you!
https://t.co/VMIMls7SBS pic.twitter.com/GQMF7L4ci7

Matthews had his own thoughts about being nominated, telling Billboard in October: “I feel like I don’t belong, but I’m pretty happy to be included… in a pretty outrageous lineup of people.” DMB fans obviously know how to move the needle, and made their displeasure known.

When Dave Matthews Band wins the fan vote but still doesn’t get elected to the @rockhall #Snubbed #Scam pic.twitter.com/PFqkeazJug

So the Dave Matthews Band won the #RockHall2020 popular vote but still didn’t get in?

Damnit, here's ANOTHER problem with the Rock and Roll Hall of Fame: You can't say the fans will have a say in who gets in and ignore that say when the time comes. Dave Matthews Band got the most fan votes and they STILL aren't in?

Dave Matthews Band isn’t getting inducted into the Rock and Roll Hall of Fame? Good.