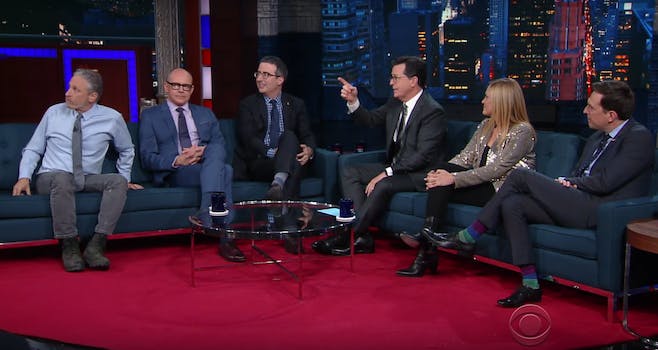 A 'Daily Show' reunion looks back and ahead.

Last night, the firing of FBI Director James Comey dominated late night, but Stephen Colbert made sure to fit in a whole Daily Show reunion, too.

Colbert spent some time with former Daily Show host Jon Stewart first, who remarked on Colbert’s recent “potty mouth” troubles. He also commented on the firing of Bill O’Reilly (“He went to a farm upstate”) and the absence of accountability at Fox News, which of course led to Trump talk.

Remarking on a potential FCC investigation of Colbert’s Trump comments, Stewart said of the president: “We can insult, he can injure.” He added: “For the life of me, I don’t understand why in this country we try to hold comedians to a standard we don’t hold leaders to.”

Colbert and Stewart were then joined by John Oliver, Samantha Bee, Rob Corddry, and Ed Helms, who looked back on some of their early field pieces. Colbert discussed having to talk to members of the Klan who weren’t familiar with Comedy Central. Bee recounted the story of a homophobic Florida man who believed lesbians were turning straight women gay and planned to seduce her and her producer.

And there was a flashback to 2005, on Colbert’s last day at The Daily Show. Bee vented about George W. Bush: “I mean, this guy does something ridiculous like at least once a month.”