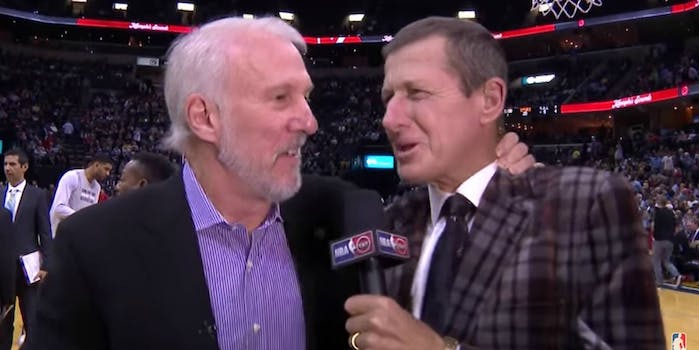 Sager was noted for his preparation and for his fearlessness in asking tough questions.

NBA sideline reporter Craig Sager, who fought cancer twice, died Thursday at the age of 65. Sager finally succumbed to leukemia, but not before his battle inspired an entire league of professional basketball players and coaches—not to mention all the fans who watched him on their TVs—and his loss sent the sports community into tears.

Sager was noted for his preparation and for his fearlessness in asking tough questions—he was one of the most respected TV reporters of any professional sport in this country—but he was also known for the loud sports jackets he wore on every broadcast.

As such, many Twitter users took it upon themselves to honor Sager by posting every garish photo they could find of him stalking the sidelines.

RIP to the legend Craig Sager. We will all miss the man with the best jacket game in the world #SagerStrong pic.twitter.com/yaFLIOYJYp

Sad to hear the news about Craig Sager, rest well Craig. You better rock your flyest jacket to that party in heaven 💙 #SagerStrong always pic.twitter.com/u6OoaJzol1

#RIP to one of the greatest sports personalities ever…. Craig Sager. Gotta cop a colorful suit jacket in his honor 😢🙏🏽 pic.twitter.com/W3MGTkivXN

My favorite Craig Sager image is him on the field after Hank's home run. Look at that jacket. What a legend. pic.twitter.com/8pyZSpPhMR

There's a few dozen pictures and videos of Craig Sager on my timeline right now and I haven't seen a duplicate sport coat yet.

Not everybody, though, was such a big fan of Sager’s outfit selection. Kevin Garnett, for one.

And Chris Paul, for two.

And with that, here’s one of the most emotional moments of Sager’s career, when he heard this from San Antonio Spurs coach Gregg Popovich, a man who does not take guff (or silly questions) from anybody in the media.