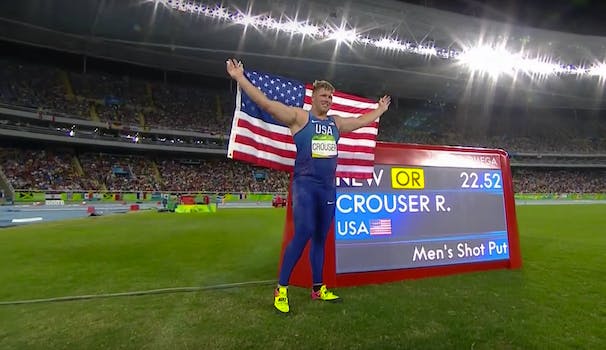 The national anthem and white privilege at the Olympics

Why do shot-putters Ryan Crouser and Joe Kovacs get a pass for not having their hands over their hearts but Gabby Douglas doesn't?

When Gymnast Gabby Douglas accepted an Olympic gold medal for the overall team competition, she proudly stood next to her teammates as the national anthem played. She did not, however, put her hand over her heart. People were outraged, accusing Douglas disrespecting the country and her team, and she was made to apologize for the incident on Twitter.

According to U.S. Flag Code, anyone addressing the American flag should put their hand over their heart, but it’s also a pretty unenforceable rule, and plenty of people don’t. For instance, Ryan Crouser and Joe Kovacs, who respectively won gold and silver for shot put last night.

Hmmm… I don't see anyone ranting when Ryan Crouser didn't place HIS hand over his heart during the National Anthem. #doublestandard

Shot Put winner Ryan Crouser didn't put his hand on his heart during the anthem. I assume the Internet will soon be aflame in outrage.

@RCrouserThrows Do you disrespect the flag as well? Anthem = right hand over heart. which you didn't do. Guess they give white boys a pass.

The discrepancy between the treatment of Gabby Douglas and Ryan Crouser is just the latest example of white privilege playing out in the Olympic games. With Douglas, the furious reactions came immediately, and were often paired with comments about how she looked. It’s deja vu from 2012, when much of the news around Douglas was about her hair, that it wasn’t straight/braided/pinned/whatever enough for the public’s liking.

Meanwhile, male athletes are rarely criticized for their looks (aside from the fact that Ryan Lochte can dye his hair white and only be thought of as more adorable for it), and the only people speaking about Crouser’s and Kovacs’s national anthem stance are people pointing out the lack of outrage. It’s hard, then, to ignore the only other obvious differences between these three Olympic gold medalists—race and gender.

White privilege, and specifically white male privilege, has been exhibited most obviously in the case of Ryan Lochte. To recap, Lochte claimed he and his teammates were robbed at gunpoint in Rio. Later, evidence pointed to a different series of events—the swimmers reportedly vandalized a gas station bathroom, and when asked to pay for it, attempted to fight gun-wielding security guards. As Daily Dot staffer Gabe Bergado so eloquently put it:

white privilege is going to a foreign country, peeing on a business's floor & kicking in a door, & then saying YOU were robbed #LochteGate

It’s not that there isn’t outrage about Lochte’s behavior, it’s that it’s been tempered by excuses. The IOC stated that “these kids came here to have fun,” and that while their actions are regrettable, we should collectively give them a break.

Lochte is 32. Douglas is 20. Lochte lied to Olympics officials, police, and his parents about destruction of property and physical altercations. Douglas had her hand in the wrong place. And yet, Lochte is seen as the “kid” who deserves a break, while Douglas is an adult who must be vilified for her actions.

In an op-ed for the Washington Post, Stacey Patton writes that black children are not allowed to be children. “If a white life cycle features innocence, growth, civility, responsibility, and becoming an adult, blackness is characterized as the inversion of that. Not only are black children cast as adults but, just as perversely, black adults are stuck in a limbo of childhood, viewed as irresponsible, uncivil, criminal, innately inferior.”

White privilege is Lochte being treated like a lovable scamp while people demand the IOC take away Douglas’s medal. White privilege is Douglas being attacked for something no one even notices Crouser and Kovacs doing. As Emma Gray writes in the Huffington Post, “When the benefit of the doubt is given freely to white men when they mess up—even in cases like this one where they actually may have broken the law—and yet withheld from others, it perpetuates entrenched systems of racism and sexism.”

Crouser and Kovacs probably won’t be dragged for not putting their hands over their hearts. And they shouldn’t, really—it’s a moot point. But their being able to walk off the podium with their heads held high should be a luxury available to every Olympian.