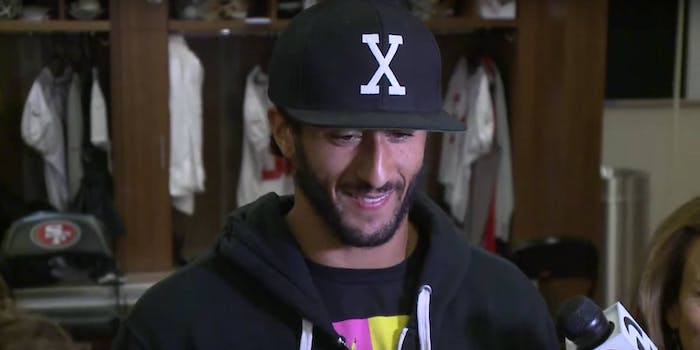 'I am not going to stand up to show pride in a flag for a country that oppresses black people and people of color.'

49ers quarterback Colin Kaepernick has faced intense scrutiny leading up to the team’s third preseason game against the Green Bay Packers. The player is fighting to start, locked in a battle between himself and current second-string QB Blaine Gabbert. Though both players were lackluster on the field during the 49ers’ 21-10 loss, it was Kaepernick’s behavior on the sidelines that appears to be getting the most attention.

As is customary in the NFL, prior to the game’s start, the national anthem was played. Kaepernick refused to stand for the duration of the song, a decision that the NFL maintains is well within his right.

.@NFL comment on Kaepernick's anthem stance: "Players are encouraged but not required to stand during the playing of the National Anthem."

Nonetheless, his behavior has come under fire, though players have reportedly voiced their support.

Kaep is using his platform & brand to make a compelling & polarizing point, which is his right, even if it's met with ire!#idontagree

Texts coming in from coaches, players, front office execs from around league on Kap. So far every player backs him. No coach/exec does.

Kaepernick claims the move is a political one. “I am not going to stand up to show pride in a flag for a country that oppresses black people and people of color. To me, this is bigger than football and it would be selfish on my part to look the other way,” the quarterback explained in an interview with NFL Media. “There are bodies in the street and people getting paid leave and getting away with murder.”

The 49ers issued a statement in support of its player, essentially pointing out that Kaepernick sitting down is just as indicative of individual freedom as “The Star-Spangled Banner.”

“In respecting such American principles as freedom of religion and freedom of expression, we recognize the right of an individual to choose to participate, or not, in our celebration of the national anthem,” the statement reads in part.

Given the NFL’s statement, it’s doubtful Kaepernick will face a fine or penalty for his decision. If anything, it may even inspire other players to help prompt a much needed national debate about the ongoing epidemic of gun violence in America.