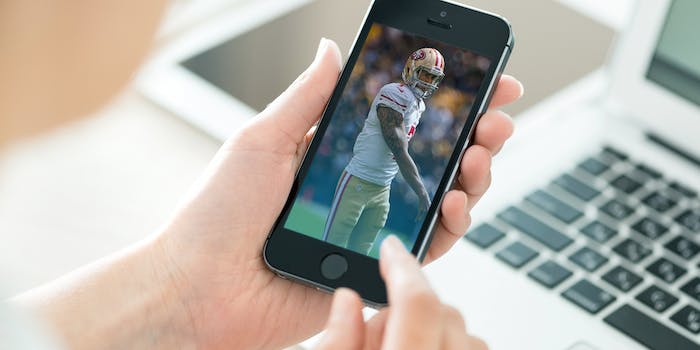 'The path less traveled doesn't need to be one of destruction.'

On top of sports commentators, fans, fellow athletes, and Donald Trump, Colin Kaepernick has yet another critic to answer to: his mom. Kaepernick’s birth mother reprimanded him on Twitter on Saturday for refusing to stand during the national anthem.

Heidi Russo, who gave him up for adoption a few weeks after he was born, told the athlete publicly that his actions have brought “shame to the very country & family who afforded [him] so many blessings.”

@Kaepernick7 There's ways to make change w/o disrespecting & bringing shame to the very country & family who afforded you so many blessings.

@Kaepernick7 The path less traveled doesn't need to be one of destruction. #beenthere #besmarter #berespectful

Users on Twitter quickly voiced their opinions that since Russo gave away Kaepernick, she shouldn’t have the right to make judgement calls on his actions.

if you want to talk about #respect, why don't you try to respect the wishes of a grown man & leave him alone?

Russo’s initial tweets sparked a conversation about adoption. Users defended her decision to give away Kaepernick, and Russo tweeted her frustration about the attacks, which included the hashtag #adoptionisablessing.

Love people who wallow in their ignorance and sit on social media in their glass houses throwing stones. #geteducated #adoptionisablessing

sure is! SEVERAL members of my family were adopted. If they weren't, they wouldn't be family. #BlessedAndGrateful

God Bless you. Adoption is wonderful. Probably the most difficult thing a Mom has to do, yet it opens of joy & life for others.

PLACING my son for adoption is NOT giving up. It's giving him the life he deserved & love beyond comprehension. Congrats 2ur son.

Lol, if I was so ashamed my son is half black, just "dropped him", & am a racist, I think I would've chosen abortion. # besmarter

Still, many pointed out that because Russo is white she will never understand the problems that her son faces. Russo told these critics that wasn’t the case.

“Never said standing up for injustice is wrong,” Russo told one critic. “Clearly there’s a problem. Don’t twist what I said to make a racial point.”

Yep, standing up 4 injustice is so wrong and shameful #ColinKaepernick 😑 https://t.co/QfKtcuSVp7

Since Saturday, Russo has continued to tweet about the incident and defend her action to other users on Twitter.

“I never said he didn’t have a point or that I didn’t support his cause,” Russo tweeted to ESPN. “Again, don’t twist what I said.”

I NEVER said he didn't have a point or that I didn't support his cause. Again, don't twist what I said.

Despite criticism, Kaepernick announced on Monday that he will continue to sit during the national anthem.

“I am not going to stand up to show pride in a flag for a country that oppresses black people and people of color,” he said in a statement. “To me, this is bigger than football and it would be selfish on my part to look the other way. There are bodies in the street and people getting paid leave and getting away with murder.”