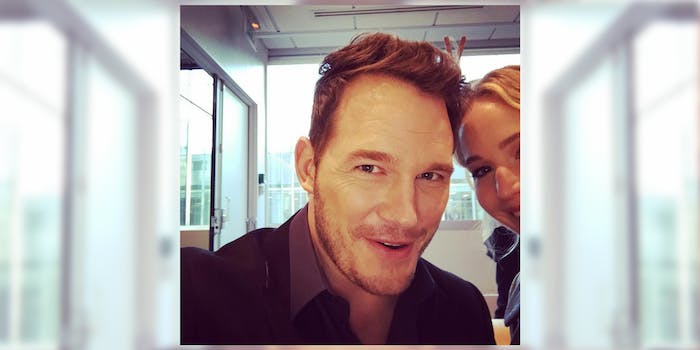 Chris Pratt is artfully elbowing Jennifer Lawrence out of photos

His 'best buddy' gets no respect.

Chris Pratt seems to be having a lot of fun on the press tour for new film Passengers. But co-star Jennifer Lawrence is missing from the picture(s).

Pratt has been keeping fans updated on the tour via Instagram, Snapchat, and Twitter, and artfully cropped the Instagram-less Lawrence out of a photo. But then he decided to give J-Law fans what they want.

Even Jaden Smith is getting in on the prank.

Here's The Deal, I Am Chris Pratt.

Pratt first promised fans a selfie with Lawrence on Snapchat, then made it a running joke. He is a master of multiplatform trolling, if anything.