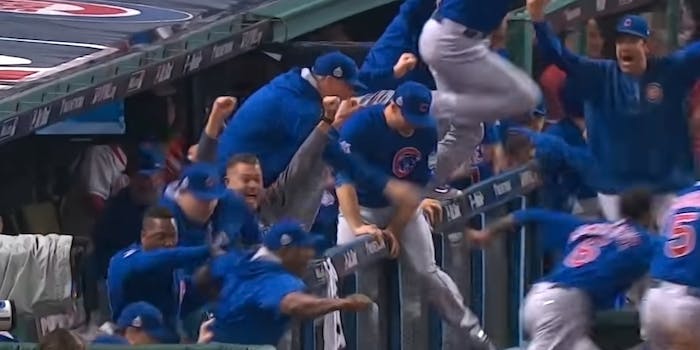 More than 100 years of real-life and fictional dreams in the making.

TV, film, and other media have turned the Cubs into something of a punchline for decades. The team often lost more games a season than it won and add in an old-fashioned curse to the mix and you have a near-perfect example of an event that could plausibly happen at any time yet be so unbelievable that the very thought of the Cubs winning sounded like something coming out of science fiction.

In what may be the most famous iteration of trying to predict the future, one of the more unbelievable parts of Back to the Future Part 2’s layout of Oct. 21, 2015 was not the wild predictions that we would have self-lacing sneakers, flying cars, or hoverboards. It was the Chicago Cubs sweeping the World Series against Miami.

Last year, as everyone obsessed over the idea of finally living out that future day in the present, the Cubs looked like they were going to pull it off. (Even if, with the Miami Marlins also in the National League, it couldn’t face the same team in the World Series.) And then they lost, sending the New York Mets to the World Series—ironically enough, on Oct. 21, 2015.

This year, the Cubs got a congratulations from Michael J. Fox himself.

Only off by a year, not bad. Congrats @Cubs. This is so heavy. #FlyTheW

As it turns out, someone did get it right: Parks and Recreation.

Two years ago, in a season that took place in the summer of 2017: pic.twitter.com/p8jaYZNwcT

The prediction came in Parks and Rec’s final season, which fast-forwarded to the year 2017. In that episode, a few of the characters visited Chicago, which was still fully elated about the Cubs’ win months after it happened. (Now we just need Joe Biden’s book of poetry to make the timeline synergy complete.)

For Parks and Rec co-creator Michael Schur, it wasn’t simply a throwaway line. He tracked the Cubs’ minor league system and the trajectory of the team’s improvement over the past few years, which reminded him of what happened when the Red Sox won the World Series in 2004. The common link between the two, curses aside, was general manager Theo Epstein.

But Schur didn’t think that his prediction was particularly a stretch; with the information in front of them, anyone could’ve made that.

“It’s not like I was only person who thought the Cubs were going to be good,” Schur told the Washington Post last week. “Every baseball writer in America knew the Cubs were going to be good. I can’t emphasize enough how little credit I feel like I should take for that prediction. It’s a little like, if we had predicted [in the show] that Hillary Clinton was the president in 2017, there would probably be people asking me about that now.”

While those two are the most famous, they’re far from the only times the Cubs’ fruitless quest at breaking the Curse of the Billy Goat came to light.

At one point, the now-canceled NBC drama Revolution showed a group of characters walking past Wrigley Field covered in weeds after all of the world’s electricity was wiped out. On the board, it announced that the Cubs were the 2012 World Series Champions, but it never made it to air. According to IndieWire, the Cubs asked NBC to remove the reference.

A Family Guy throwaway reference suggested that Stewie Griffin told Steve Bartman to catch the baseball that would eventually haunt the Cubs for more than a decade.

Simpsons did it: The show referenced how hopeless rooting for the Cubs was (and why one of the show’s bullies does it) as well as showing through one of its “Treehouse of Horror” episodes the only way the Cubs could win.

And of course, while it occurred off-screen, Rookie of the Year’s Henry Rowengartner, a 12-year-old Little League baseball player who was recruited by the Cubs for his pitching ability, had a World Series ring.

But as much as we tried to imagine it? The real thing was more astounding than anything we could have come up with.