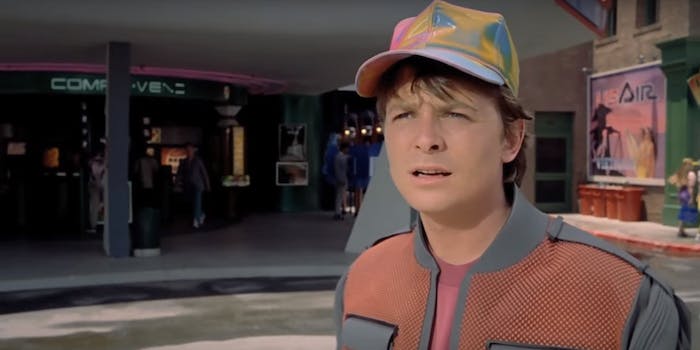 The ultimate guide to ‘Back to the Future’ Day

We’ve been waiting nearly three decades for the date Marty McFly and Doc Brown arrive in the future in Back to the Future Part II, and now the future has finally arrived.

Fans of the Back to the Future trilogy and obscure pop-culture dates, pranksters, and brands are more than thrilled about it.

It was a very different future that Marty and Doc discovered, one largely fueled by ’80s nostalgia and dreamed-up futuristic inventions. And while we don’t have flying cars, hoverboards, or dehydrated pizza, the movie’s interpretation of 2015 got plenty right (including the one thing it predicted by accident). But the discrepancies are OK, because Doc Brown somehow came back in his DeLorean time machine, which was destroyed by a train in Back to the Future Part III, to tell us just that.

“Yes, it’s different than we all thought, but don’t worry, that just means your future hasn’t been written yet,” he said.

The films have sparked our curiosity and our creativeness, inspired the next generation of scientists and more than a few hoaxes. And before we know it, it’ll be part of the past.

Until then everyone is getting in the futurist spirit to look back at what could’ve been and what we have ahead of us.

And where we’re going, we don’t need roads.

The future is here, thanks to #brands

There’s plenty of product placement in Back to the Future Part II, from Pepsi to Pizza Hut, Nike, and even USA Today, as well as new technology such as flying cars and hoverboards. And although their products haven’t changed much, they did make an exception for today, which is making some fans wonder if the day is too commercialized.

#BTTFDAY has gotten too commercialised. We've forgotten the true meaning of travelling in time to make sure our parents have sex

USA Today, for instance, tweaked the logo on its website, although tomorrow’s front page will probably be very different than what the Hill Valley edition looks like.

Hydrated @PizzaHut & #PepsiPerfect in honor of the Back To The Future 30th Anniversary Trilogy. #BTTF2015 @Pepsi #sp pic.twitter.com/3s7It3TVvm

Pepsi might have them all beat. It debuted Pepsi Perfect at New York Comic Con and will be selling 6,500 limited-edition bottles of Pepsi Perfect today for $20.15. And it has the fake commercial to show for it.

Hoverboards are even getting in on the game, despite not existing in the original movie form. Universal Pictures, which produced Back to the Future, made a fake commercial for the version Marty rides to escape Griff and his gang.

And who could forget Jaws 19? Quick, let’s Kickstart those other 15 films!

What we got right (and wrong)

Perhaps the only good thing about the oversaturation of Back to the Future day is a reunion of stars Michael J. Fox and Christopher Lloyd, even if it is for a supersized Toyota commercial. But while discussing what did and didn’t happen, they learn a thing or two about the real-life version of Mr. Fusion.

College Humor brought Marty and Doc to Oct. 21, 2015, but as they discovered, it wasn’t anything like how they imagined. In some cases, it was probably worse.

The Fine Brothers took to talking to some of their teen reactors, the people who are on top of the latest technology, to see just how well Back to the Future Part II predicted 2015. And they may not have been alive to see 1985, but they love it just the same.

Good thing one of the many Judgment Days hasn’t happened yet, because the future would be bleaker than ever.

Bring on the nostalgia and trivia fodder

Back to the Future has a long and rich history, and it’s finally getting explored in-depth with the Kickstarter-funded documentary Back in Time, which is being released today.

Although Elijah Wood is more known for Lord of the Rings today, his first role is pretty memorable too: He was the kid who was unimpressed at Marty’s Wild Gunman skills at Cafe ’80s in Back to the Future Part II. And thanks to Conan O’Brien, we now know what a 34-year-old Wood looks like with a green colander on his head.

If you can’t get enough of random facts and trivia about the trilogy, io9 has a video just for you.

How you can celebrate today

Luckily for us, Pepsi isn’t the only one that has our 2015 fix covered.

The Back to the Future trilogy is free to stream on Amazon Instant Video (with an Amazon Prime account), so if you haven’t indulged in binge-watching them in some years, kick back and relax.

Great Scott! Back to the Future Day is here! Watch the trilogy on #PrimeVideo: https://t.co/nUng6qDiqS #BTTF2015 https://t.co/utxgDnPrxW

If you live in or near Chicago, you can get your hands on some Twin Pines Mall beer, a double IPA collaboration between Pipeworks Brewing and Emporium Arcade Bar. It’ll be served today at Emporium Wicker Park’s Back to the Future–themed party (paired with movie screenings) while the Chicago Cubs, the 2015 World Series champions in the film, will possibly lose their chance to play in the World Series if the Mets win tonight. For those who can’t attend, a limited supply will be sold later this month.

DaveHax already made a video on how to recreate the DeLorean from Back to the Future from soda cans, but now he has an update on how to upgrade your model to the 2015 version.

Have you ever dreamed of riding a DeLorean? Thanks to Verizon and Lyft, you can now request a DeLorean to take you wherever you need to go (in participating cities).

We’re not sure if this video explaining how Back to the Future predicted 9/11 is serious or just trolling everyone, so we’re just gonna leave it here without comment.