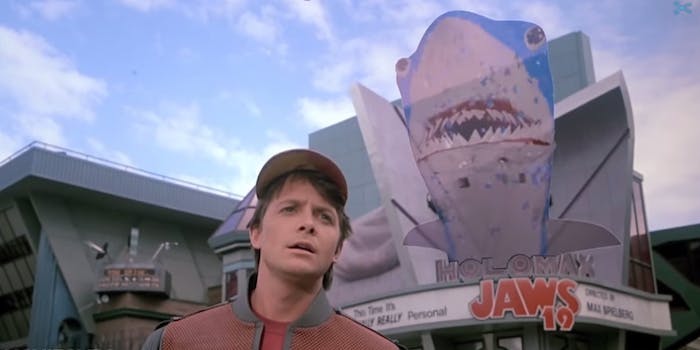 We want our hoverboards already!

It’s now 2015, and if you are a regular Facebook user, then your News Feed has no doubt been inundated with references to Back to the Future Part II. The second part of the 1980s comedy-sci-fi trilogy saw our hero, Marty McFly, transported to the year 2015, where he noticed that Hill Valley had been upgraded to an ’80s version of the future.

Now that it actually is 2015, let’s take a look at some of the technological and social advances that Back to the Future Part II didn’t exactly get right.

Flying cars have been a futuristic dream ever since 1960s sci-fi. The Back to the Future universe was no exception to this; we were first introduced to the airborne DeLorean in the closing scene of the first movie.

While automotive technology like Google’s self-driving car is certainly impressive, all of our personal vehicles still unfortunately need roads.

“It’s 2015, so where’s my hoverboard?” Every Facebook friend of yours who thinks they are a hilarious pop culture reference-maker has no doubt made this a status update by now.

While a company has indeed designed a prototype of a hoverboard, they still have yet to be licensed by the Mattel corporation and sold as playthings. We daredevils must stick to gravity-dependent skateboards and scooters for now.

In the closing scenes of the original Back to the Future, Doc Brown appears to use actual garbage as fuel for the flying DeLorean.

While some of today’s cars may come equipped with phone control and be 3D-printed, none are being manufactured with the Mr. Fusion Home Energy Reactor yet. So finish that can of beer; your car still needs to run on overpriced gasoline.

The clothing styles in Back to the Future Part II suggest that we are all going to be walking around with silver spaghetti strainers on our heads, colorful face tattoos, and some sort of CPU chest protector.

While they may appear ridiculous, take a moment to look around at what passes for fashion these days. Head-mounted spaghetti strainers are no more WTF than Ugg boots and grungy flannel shirts.

The future McFly family enjoys a “hydrated” pizza courtesy of Pizza Hut. Donut-sized when it comes out of the package, the pizza turns into a delicious helping of product placement after only a few seconds in the Black and Decker Hydrator.

Unfortunately, we still must prepare all of our own meals using old-fashioned methods, like microwaves.

Marty’s “Nike Air 2015 Kicks” are notable in that they lace themselves up and lock onto his feet. They actually existed back in 2011, but the high price tag kept them out of reach for most consumers.

Sure, some of today’s footwear has GPS capabilities, but most of us still must lace up and adjust our shoes manually.

Shoes aren’t the only articles of clothing that saw advancements in the Back to the Future universe. After jumping fully dressed into a lake, Marty’s drenched wardrobe activates a built-in air dryer that has him dry in seconds.

Not only is such a technology nowhere near completion for us yet, but a true 2015 resident would not be so hasty to jump into water fully clothed without making sure his phone isn’t in his pocket.

Marty’s skills at the now-retro video game Wild Gunman only seem to impress him. A few kids dismiss his performance, as they control video games with their minds, not their hands. How ancient.

Devices like the Wii, Xbox Kinect, and even the Oculus Rift may allow us to interact with our favorite video game titles without handheld controllers, but brain-operated video games are still a long ways off. In fact, after three decades of constant video gaming, will we even have sufficient brainpower to make a brain-operated title worth the production?

That said, the young kids’ disgusted reaction to video games that we older folks once held dear is spot-on.

Signs and video images appear in midair throughout Back to the Future Part II. One wonderful example of this is a hologram ad for Jaws 19, which makes a too-realistic dive for passing pedestrians.

First of all, the Jaws film series thankfully stopped after the putrid Jaws: The Revenge. Additionally, while movie theater companies may be resorting to desperate measures to draw people into theaters and away from Netflix, interactive holograms have yet to be introduced into that plan.

One thing this scene did accurately predict about future movies? CGI creatures look absolutely nothing like their real-life counterparts.