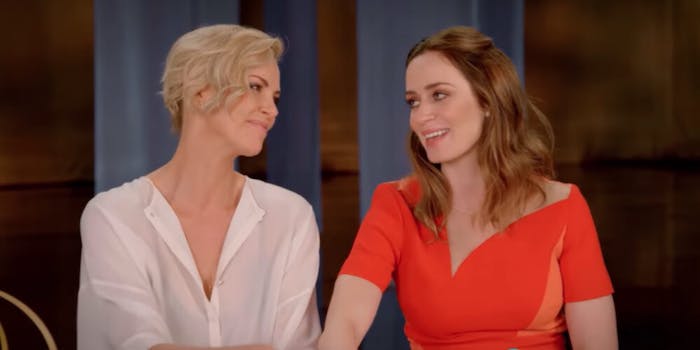 Charlize Theron got catfished by someone pretending to be Emily Blunt

Theron DM'd the catfish under the impression they were Blunt.

Yes, it’s true: Everyone you meet online isn’t who they say they are. But sometimes celebrities learn that lesson the hard way.

Actress Charlize Theron—who is new to the social media world—recently admitted to messaging someone who she thought was Emily Blunt, only to discover they were merely posing as the star.

Her statement came during an appearance on A Little Late with Lilly Singh this week after Theron admitted that it was Singh to taught her how to use social media in the first place.

Theron said Singh didn’t warn her about fake accounts, though.

“The one thing that you missed in your tutorial is that there’s this thing called fake accounts, which I did not know,” Theron said. “I was following a lot of people.”

“I was following ‘Emily Blunt,’” she said, using finger quotes when saying the actresses’ name. “But I wasn’t really following Emily Blunt.”

Theron said a friend tried to warn her Blunt—who was Theron’s co-star in The Huntsman: Winter’s War—wasn’t on social media.

“I thought, you know, maybe people just didn’t really care about what Emily Blunt was doing,” she said.