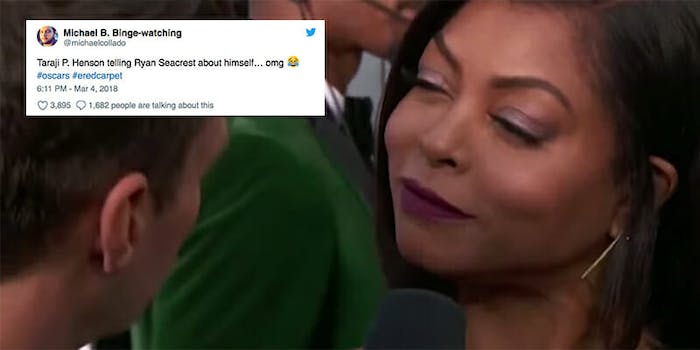 Details of sexual assault allegations against him came out last week.

Ryan Seacrest is a fixture on the Oscars red carpet as much as big stars like Meryl Streep or Tom Hanks. But celebs steered clear of the E! host this year after detailed allegations against him came out on Monday. E! and its parent company NBCUniversal have stuck by their guy, but as predicted, many stars in the wake of the #MeToo and Time’s Up movements weren’t willing to take the risk.

As Mashable pointed out, major stars were missing from Seacrest’s list of interviewees. Only two of the 20 people Seacrest interviewed—Allison Janney and Christopher Plummer—were nominated for an Academy Award.

“You know what, the universe has a way of taking care of the good people, you know what I mean?” she told him.

Taraji P. Henson served the slickest and deserving shade to Ryan Seacrest, and I'm so here for it! His ass probably didn't even catch it #Oscars pic.twitter.com/ILnEctb6jb

Time’s Up pins and talk about the #MeToo movement were tamer on the red carpet than at the Golden Globes in January. But the sentiments lingered, especially as Seacrest interviewed Christopher Plummer, who took over Kevin Spacey’s role in All the Money in the World following the sexual assault allegations that disgraced the House of Cards actor.

Publicists talked with Page Six ahead of the award show, explaining that they were planning to steer their clients clear of Seacrest.

“Usually Ryan is the one you want, but there are so many outlets on that carpet,” an unnamed PR veteran told Page Six. “Why risk it? There’s plenty of other places for clients to get the exposure.”

Another publicist added: “If it was a [client who had been involved in the #MeToo movement], I would never put them in that position. I don’t think any smart person would.”

Former E! stylist Suzie Hardy on Monday shared details of her allegations of sexual assault against Seacrest, which broke via the Hollywood Reporter.

During the Oscars, people on Twitter pointed out the apparent tension between Seacrest and other celebrities on the red carpet.

E! just referred to Casey Affleck pulling out of his presenting duties amid sexual harassment allegations (“an awkward situation”), and then cut to Ryan Seacrest a few moments later. This is weird.

Me @ anyone who does a friendly interview with Ryan Seacrest tonight pic.twitter.com/JFxBybiBcg

It's very noticeable he us getting no interviews

Ryan Seacrest is about the fourth spot on the carpet. His team was not pleased when I took a photo of him. #Oscars pic.twitter.com/6s9HC8GGT1

everyone walking down the Red Carpet & seeing Ryan Seacrest is steps away waiting to interview them.#Oscars pic.twitter.com/wIDSyaFft0