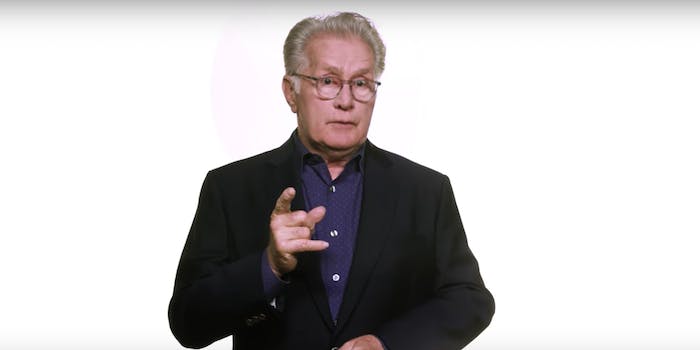 Screenshot via Unite for America/YouTube

Celebrities urge Electoral College to not vote for Trump

The star-studded cast thinks Trump is unfit to serve.

The Hail Mary effort to keep Donald Trump out of the White House just got some celebrity support.

In a new video published to YouTube by the group Unite for America, Martin Sheen, Debra Messing, Bob Odenkrik, B.D. Wong, and other celebrities ask Republican electors to vote against Trump when the Electoral College votes on Dec. 19.

Arguing that America’s Founding Fathers created the Electoral College specifically to keep an “unqualified candidate” from occupying the White House—someone, they say, like Trump—the actors urge 37 Republican electors to “vote your conscience” and deny Trump the presidency.

Trump supporters have pushed back against any efforts to sway the Electoral College away from Trump as undemocratic and hypocritical, given Clinton supporters’ focus on Trump’s unwillingness to say he would respect the outcome of the election were he to lose.

Such efforts are not expected to work. Were the Electoral College to surprise America by denying Trump 270 electoral votes, the Republican-controlled House of Representatives would pick the president instead.