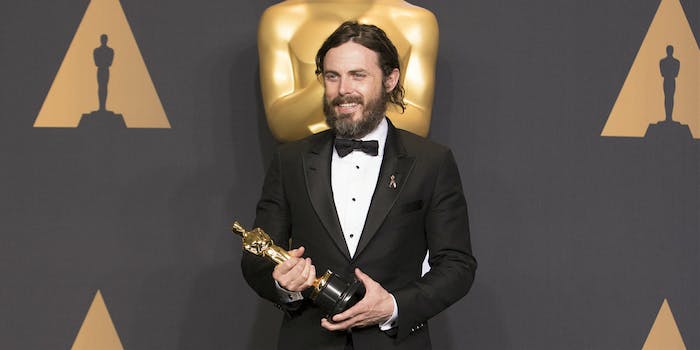 Casey Affleck admits that he contributed to ‘unprofessional’ behavior on set

The Oscar-winning actor speaks about civil lawsuits and Me Too.

Casey Affleck finally addressed claims made against him of abuse and harassment on Thursday.

He spoke to the Associated Press’ Lindsey Bahr about the civil lawsuits he faced from two women on the production of the 2010 mockumentary I’m Still Here while promoting The Old Man & The Gun. In the lawsuits, one woman said that Affleck told a member of the crew to expose himself to her and verbally harassed her while another said that she was groped by Affleck. (Affleck settled both cases out of court.)

While the allegations were brought up multiple times throughout Oscar season and Affleck faced plenty of criticism in 2017, the backlash didn’t hurt Affleck’s frontrunner status in the Oscar race: He won the Oscar for best actor for Manchester By the Sea. His win garnered comparisons to President Donald Trump, who won the 2016 election even after multiple women came forward with allegations of sexual misconduct.

Since then, the conversation around sexual harassment and sexual assault in Hollywood has changed drastically. Affleck, who was in his early 30s when the incidents allegedly occurred and 40 during the height of the 2016-2017 Oscar season, says he has “learned a lot” in the past couple years about keeping a production under control when he’s running the show.

He said that he “didn’t know how to handle” the civil lawsuits he faced for alleged misconduct on the I’m Still Here set. He didn’t agree with how it was characterized, but he saw the settlement as the best solution at the time. But he’s been paying attention to conversations and has come to the realization that the conduct of the crew is up to him.

“The cast was the crew and the crew was kind of the cast and it was an unprofessional environment and, you know, the buck had to stop with me being one of the producers and I have to accept responsibility for that and that was a mistake,” Affleck said. “And I contributed to that unprofessional environment and I tolerated that kind of behavior from other people and I wish that I hadn’t. And I regret a lot of that. I really did not know what I was responsible for as the boss. I don’t even know if I thought of myself as the boss. But I behaved in a way and allowed others to behave in a way that was really unprofessional. And I’m sorry.”

Affleck also addressed his decision to not attend the 2018 Oscars and present the award for best actress—an award traditionally given by the previous year’s winner for best actor. At that point, multiple investigations into alleged misconduct by powerful men in Hollywood had been published, as well as Affleck’s own alleged misconduct resurfacing again, and Affleck noted that he didn’t “want to become a distraction.”

“I think it was the right thing to do just given everything that was going on in our culture at the moment,” he added. “And having two incredible women go present the best actress award felt like the right thing.”

(Affleck’s name was brought into the conversation anyway after domestic abuse allegations against Gary Oldman, who won the best actor Oscar in 2018, resurfaced.)

Affleck’s tone has changed since the civil suits, and he appeared to have put some thought into his comments. But whether people take him at his word or interpret it as a more cynical PR move is another thing entirely.

You can watch the full interview below.