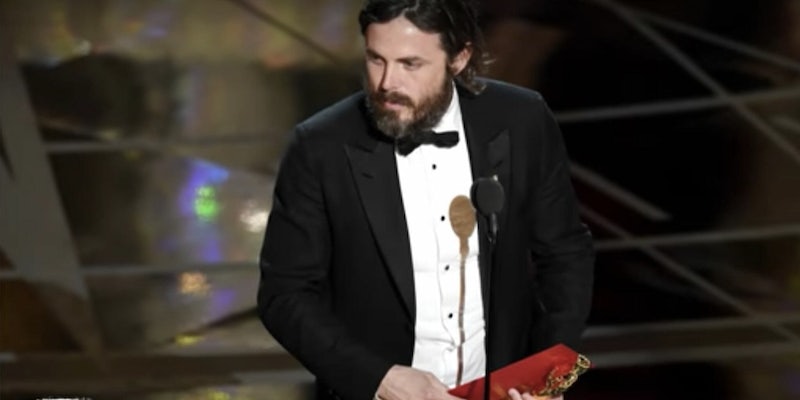 '[H]old them accountable for their actions.'

An online petition aims to ban actor Casey Affleck from the 2018 Academy Awards because of past sexual harassment allegations made against him.

Affleck took home the best actor Oscar for his role in Manchester by the Sea this year, meaning that he would be the presenter for the 2018 best actor award. The petition demands Affleck be barred from the 2018 Oscars and references Harvey Weinstein and his ongoing wave of sexual assault allegations.

“The Academy Awards recently voted to strip Weinstein of his membership—but did you know that another accused sexual harasser is set to participate in the 2018 ceremony?” The petition reads. “With so many incredible accusations against him, the Academy should take action against Affleck and ban him from participating in the ceremony.”

In 2010 two women working with Affleck filed sexual harassment suits against him, one woman suing him for $2 million and the other for $2.25 million. The cases were both settled in court in 2010 for an undisclosed amount. Affleck has denied these allegations.

After his 2017 Oscar honor, many were upset that Affleck won in the first place.

Casey Affleck is avoiding eye contact with every woman in the room. #Oscars

Can we check Best Actor again

The creator of the online petition, Cameron Bossert, said he is a filmmaker and he wants to know that the industry he is entering respects and protects everyone, regardless of gender. “Let’s stop honoring people like Weinstein and Affleck and hold them accountable for their actions,” he wrote.

The Academy has not commented on Affleck. The 90th Academy Awards will take place on March 4, 2018.