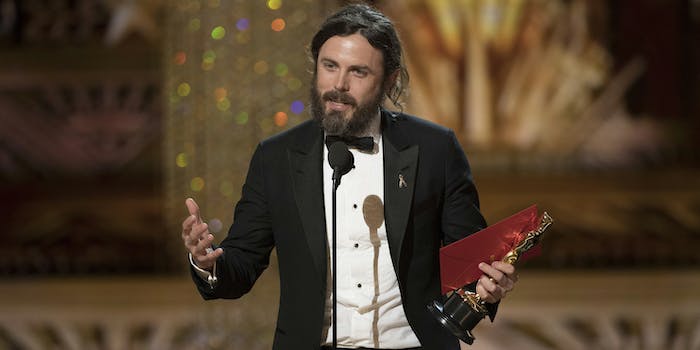 Casey Affleck will not present at the Oscars

Amid backlash, the actor is taking a hint.

It appears Casey Affleck can take a hint, after all.

The 42-year-old actor announced on Thursday that he has withdrawn from this year’s Oscars award ceremony and will not present the best actress award, foregoing Academy Award traditions.

His announcement comes at the heels of public outcry that it would be inappropriate for a man accused of sexual harassment to present the best actress award during the #MeToo era (or ever, honestly). Last fall almost 20,000 people signed an online petition to remove Affleck from the ceremony.

Affleck won best actor for his role in Manchester By the Sea in 2017 despite a history of impropriety and having settled two lawsuits for sexual harassment back in 2010 that cost him at least $4.25 million.

A rep for the Academy of Motion Picture Arts and Sciences confirmed the withdrawal to Variety and said, “We appreciate the decision to keep the focus on the show and on the great work of this year.”

Affleck still denies the allegations but instead said he’s withdrawing because he “did not want to become a distraction from the focus that should be on the performances of the actresses in the category,” according to Deadline.

There’s no doubt that the irony of Affleck giving the award would have caused a distraction and many on Twitter joked that he probably knew that the actresses nominated for the award would not have cut him any slack.

Casey Affleck has chosen not to present this year’s Academy Award for Best Actress.

Casey Affleck won't present the Best Actress award because he has to stay at least 500 feet away from most of the nominees, probably.

Time to bring back that gif of Brie Larson not clapping for Casey Affleck when he won the Oscar. pic.twitter.com/yYWW6Btob8

In other news, Casey Affleck will not be presenting the award for Best Actress at the 90th Academy Awards because he doesn't want Frances McDormand to knee him in the groin, physically and verbally. pic.twitter.com/ZUqslD34tz

Affleck’s decision is more than too little, too late. It’s a reminder that it was just one year ago institutional systems in Hollywood like the Academy allowed men like him to reap the benefits of their career despite treating women badly.

It may feel like the #MeToo era has been going on for forever since it broke into the mainstream in October. But moments like this remind us that the movement has only just begun.