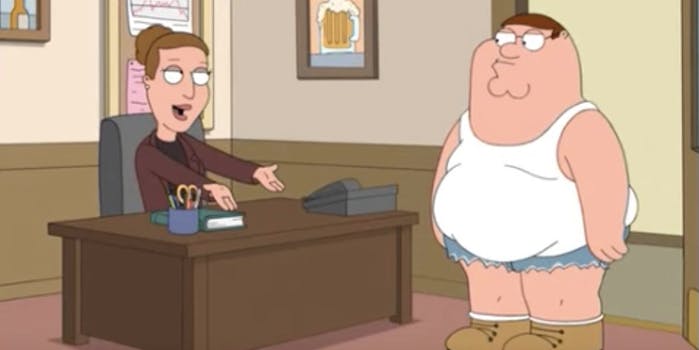 Carrie Fisher will be in 2 more upcoming ‘Family Guy’ episodes

Plus, that time her character sexually harassed Peter Griffin.

Carrie Fisher is being remembered the world over for her work as a script doctor, a brilliantly witty author, and, of course, an actress. But it’s not just Star Wars, Blues Brothers, and When Harry Met Sally that you should be binge-watching this weekend. Her voice can also be heard in almost two dozen episodes of Family Guy.

Since 2005, she had a recurring role as Angela, Peter Griffin’s brewery supervisor, and Variety reports she’ll reprise the role in two more episodes in 2017. No vocal manipulation necessary: She already completed the voice acting work for Seth MacFarlane’s long-running cartoon earlier this year.

Carrie Fisher was smart, funny, talented, surprising, and always a hell of a fun time to be around. Family Guy will miss her immensely.

Meanwhile, an old favorite clip of Angela has shot to the top of Reddit’s r/videos community today.

Not exactly the princess we know and love, but still a woman who says what she wants when she wants.