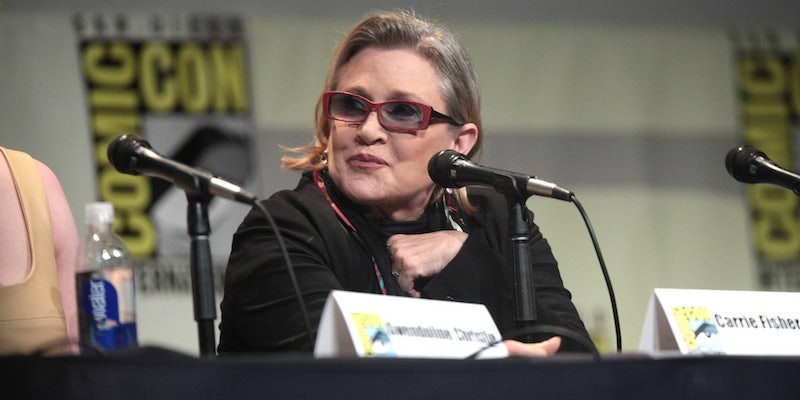 'Star Wars' is just the beginning.

In the blink of an eye and soon after Rogue One: A Star Wars Story premiered, the world lost Princess Leia. Legend Carrie Fisher died this morning at 60 after suffering cardiac arrest on Friday, devastating fellow actors and fans alike.

The daughter of famous parents Eddie Fisher and Debbie Reynolds achieved her own stardom, becoming known for her wit, films, novels, and of course, Star Wars breakthrough.

You may want some of her work in your life right about now, and these are the movies you can rent or stream tonight.

The actress’ 1975 role in Shampoo was her film debut. At 18, Fisher owned the minor role of Lorna Karpf alongside Goldie Hawn, Warren Beatty, Lee Grant, and Julie Christie, landing her a spot in the Hollywood eye.

The Academy-Award winning film can be rented via YouTube, Amazon Video, Vudu, and Google Play.

This American comedy classic features an impeccable cameo from Fisher… and, you know, pretty much the best soundtrack ever.

You can rent the film on YouTube, iTunes, Amazon Video, Vudu, and Google Play.

This gem of a movie featuring co-star Tom Hanks reveals how a picture-perfect family begins to lose its squeaky-clean appearance at the arrival of new neighbors in the cul-de-sac, poking fun at the ideation of suburban perfection and expectations. Hanks and Fisher’s chemistry pops, their slapstick comedy is great, and they both shine in this hilariously bizarre battle between two families.

You can watch this eccentric movie on iTunes, YouTube, and Google Play.

This well-known romcom stars Meg Ryan, Billy Crystal, Bruno Kirby, and Carrie Fisher in their battle of love and lust in 1980s New York City. Though the plot circles around Ryan and Crystal’s love story, Fisher manages to shine as Ryan’s best friend, Marie, preaching the truth and serving as a voice of reason. At a lunch with the three best friends, Fisher steals the show by spurting out, “The right man for you might be out there right now and if you don’t grab him, someone else will, and you’ll have to spend the rest of your life knowing that someone else is married to your husband.”

The film can be streamed on Hulu; rented on iTunes and Amazon Video; or purchased on YouTube, Google Play, and Vudu.

Hannah and Her Sisters

This Woody Allen classic brings together an extended family on Thanksgiving, slowly uncovering their problematic relationships over a 24-month period focusing on three sisters before closing again on Thanksgiving. The chaos begins when Hannah (Mia Farrows) discovers an affair between her husband (Michael Caine) and one of her sisters, Lee (Barbara Hershey). Fisher plays third sister April, Holly’s (Dianne Wiest) rival in both work and love, as they battle for the affections of an architect and a part in a Broadway musical. Fisher’s role is once again minor but unavoidably dazzling.

You can rent it via Amazon Video.

Postcards from the Edge

The film, originally adapted from Fisher’s semi-autobiographical novel of the same name, does not actually star Fisher. However she provided the story and screenplay, winning several nominations and awards along the way. Meryl Streep’s dynamite performance as Suzanne Vale, a recovering drug-addict actress who’s trying to both save herself and escape her mother (Shirley MacLaine), somewhat reflects on Fisher’s own relationship with her mother.

It’s worth a watch, and it’s available for rent from Amazon Video, YouTube, iTunes, Google Play, and Vudu.

Soap Dish is noted as one of the ’90s most renowned comedies. Even though Fisher’s part can pass as a cameo, her one-liner, “An actress, Really? How nice for you! I’m Betsy Faye Sharon, and I’m a bitch” causes an uproar. Her spunk and spice are undeniable in this movie surrounding the cast and crew of a fictional soap opera. Co-stars include Sally Field, Robert Downey Jr., Whoopi Goldberg, and Kevin Kline.

The movie is available through Google Play, Amazon Video, YouTube, and Vudu; or to Cinemax Go subscribers.

Though this isn’t a movie, the HBO one-woman show that later inspired her written memoir of the same title brings out the best of Fisher. The feature-length documentary of the staged production gives honest insight into her life growing up already famous, battling the trials of Hollywood life. Her performance is grandiose and memorable, as she makes audiences laugh with her life and undeniable sense of humor.

This blockbuster needs no introduction. The actress’ fame can be attributed to her performance as Princess Leia Organa in the epic sci-fi franchise that took place “a long time ago in a galaxy far, far away.” The movies aren’t streaming anywhere, but the first six films can digitally downloaded as a bundle on Amazon for $64.99 and Google Play for $79.99.

You can also stream the movies on VidAngel.

May the force be with you, Carrie.