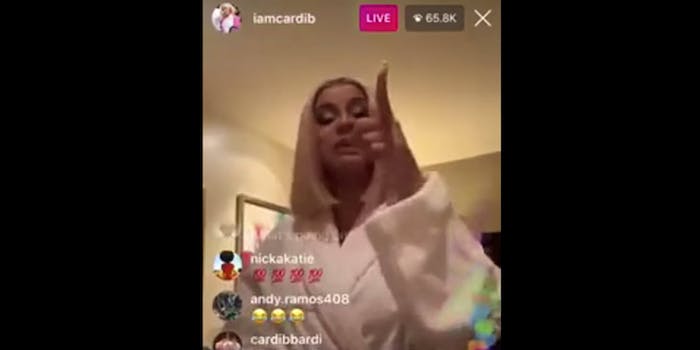 Cardi B is getting called out for 'weaponizing' AIDS in a fury-fueled Instagram Live rant.

Cardi B blasted Access Hollywood for alleged misuse of her quotes, leading to a misleading headline.

The headline initially read: “Cardi B Admits Baby Kulture Calls Someone Else ‘Mommy’ Because She Works So Much.”

However, the Bronx rapper vehemently denies the context from which the Access Hollywood headline was created. Upon learning of the header, the Cardi B went off in an Instagram Live video, which is now causing its own problems for the artist.

Respect. Cardi B goes off on blogs for using Kulture as clickbait! Thoughts? pic.twitter.com/44zfg7rDBW

She goes on: “I said, ‘Things have changed because a lot of people expect me to do so many things… So I’m sorry if I take time out my day that I could be five hours in the studio but I spend five hours with my kid. Because, yes, I could have somebody babysit my f*cking kid, but it’s a wack feeling when your kid’s not even trying to f*ck with you and trying to call somebody else mommy. That’s why you gotta spend time with your kid.’”

Cardi claimed Access Hollywood cut the passage to create the appearance that she admitted to neglecting her daughter, Kulture.

Cardi’s rage-out escalated to the point that she claimed she would “spit” on the publication, and then added wildly insensitive comments to the fire: “Access Hollywood, suck my whole d*ck. Suck a d*ck, I hope your f*cking mom catch AIDS, bitch.”

None of the commenters visible in the recording of the rant on World Star Hip Hop immediately called Cardi B out for her AIDS comment. However, it appears to have bothered several of her fans, including people supportive of her initial point.

I was all for Cardi's rant and really understood why a mother would be angry like that until she had to use AIDS as an insult which unfortunately invalidates everything she said. I hope she takes it back. She'll get backlash for it and she'll feed right into the haters again.

Are y’all going to defend Cardi B saying she hopes someone’s mom catches AIDS???? Personally she’s just as trash as Khia and anyone else weaponizing HIV/AIDS jokes for reaction purposes…#Press pic.twitter.com/GOrsD8uEKR

i understand cardi b defending her child, believe me i do. however, her wishing that someone’s mom, or anyone for matter, “catches AIDS” is disgusting — there’s nothing she can do will ever be forgivable for a vile, ugly, and spiteful statement like that.

Some people on Twitter took issue with her “weaponizing” AIDS in such a way; still others pointed out that she might have fans who have HIV/AIDS who now feel alienated by the artist.

The Access Hollywood video and its landing page have since been deleted, though some archives of it are still making the rounds on Twitter.

This is the interview that set Cardi B off. She again made up something around her kid in order to get sympathy. To wish this BLACK MAN’s mother gets AIDS is low and says a lot about her upbringing. pic.twitter.com/74G25u6Vbv

This isn’t the first time Cardi B has found herself in the crossfire over insensitive comments: She previously was forced to apologize for a transphobic meme on her Facebook page.