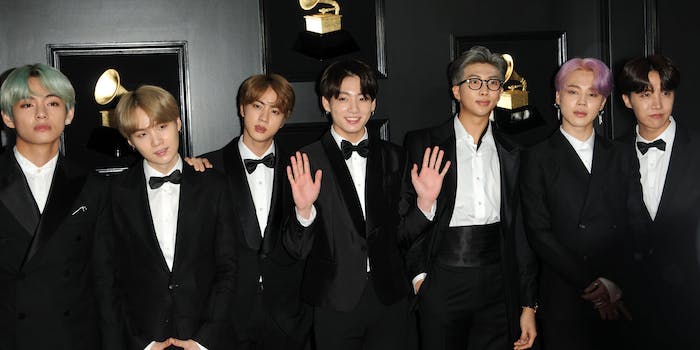 In a video, the streamer compares the two clips.

One of the most popular bands in the world may have a legal battle on its hands.

BTS, a popular K-pop group with massive global reach, is being accused of using a Twitch streamer’s voice without his approval in a recent song. The streamer in question, Greekgodx, posted a video comparing the two voice clips. They are remarkably similar, and if the allegation is true, it could lead to a legal struggle between him and the group.

The clip in question comes from one of BTS’ recent release, “UGH!” Toward the start of the song, a voice can be heard shouting, “Let’s go.”

In his video, Greekgodx compares the BTS clip to one of his own, from the beginning of a song called “GGX Gang.”

If BTS, often regarded as the biggest boyband in the world, did, in fact, use Greekgodx’s voice without his permission, it could spell legal trouble. It is currently unclear what steps Greekgodx will take, but he will almost certainly seek some kind of compensation.

If BTS removes the sample and re-uploads the track, it could help with any potential legal action. As of now, however, it is hard to say how the band—and its legal team—will choose to respond. If the clip is proven to belong to Greekgodx, he will have a number of possible steps he can take moving forward.

Fans of both BTS and Greekgodx will have to wait to see how both parties choose to proceed, but it seems certain that this drama is far from over.