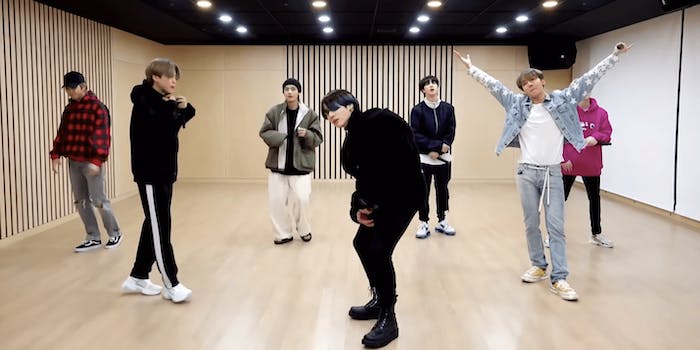 The coronavirus global pandemic has kept people around the world confined to their homes, but that didn’t stop the members of BTS from having the time of their lives on The Late Late Show with James Corden last night.

Streaming from their native South Korea, the members of BTS greeted Corden and wished their massive global fan base well. From there, they took to their practice space and ripped through a spirited rendition of “Boy with Luv,” featuring live vocals and characteristically detailed choreography. (Or is it… quar-eography?)

Fans were predictably delighted with the performance, and #BTSONHomeFest became the highest-trending hashtag in the world for several hours last night.

With massive hooks, an effortlessly danceable beat, and a great Halsey cameo, it’s easy to see why “Boy with Luv” peaked at No. 8 on the Billboard Hot 100, a peak that the BTS members recently surpassed with new single “On.” Judging by their HomeFest performance, they didn’t let their skills get rusty during quarantine, either. BTS was set to embark on a North American stadium tour next month, but its label, Big Hit Entertainment, decided to postpone the dates last week.

Before BTS’ performance, RM offered words of encouragement to fans struggling to cope during quarantine. “During a time when social distancing is crucial, we’re so grateful we can connect with you from here,” he said. “It may seem like we’re isolated, but we’re still connected through our shared experiences, courage, and laughter.”