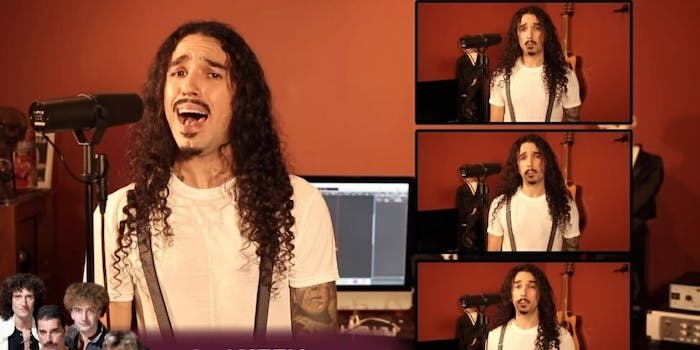 Johnny Cash is represented. So are plenty of heavy metal acts.

Anthony Vincent is a hugely talented YouTube singer with a hugely successful channel. Now, he’s taken on one of the most beloved singers of all time, Freddie Mercury, and he’s belted out a unique rendition of “Bohemian Rhapsody” in more than 40 different musical styles.

Known best for his 10 Second Songs YouTube channel, which has 2.7 million subscribers, Vincent took Queen’s most famous anthem and put his own spin on it.

Do you want to hear how Johnny Cash would sing “Mama, just killed a man. Put a gun against his head, pulled my trigger, now he’s dead”? Do you want to hear “Bohemian Rhapsody” in the mold of David Bowie singing “Space Oddity?” Or maybe you’d prefer it in a heavy metal style like Ozzy Osbourne, System of a Down, and Dream Theater?

Vincent said after his performance, “It was a big task, and I finally decided to really do it and disappear for a little while to get it done.”

The selection of “Bohemian Rhapsody” probably isn’t completely random. A Mercury biopic, actually called Bohemian Rhapsody and starring Rami Malek in the lead role, is set to be released this week, and other social media users have been playing along with first-time reaction videos and long-game Twitter schemes.

Usually, in his videos, Vincent does 15-20 styles per song. But for this one, he performed twice as many. Queen and Freddie Mercury certainly are deserving of that. Or, as one YouTube commenter wrote, “This wasn’t just a normal video… It was a spiritual experience.”