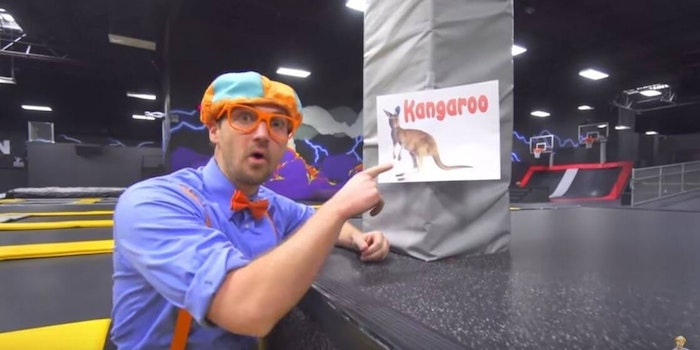 YouTube star Blippi is going on tour, but some parents are livid about it

They didn't read the fine print.

When Stevin John announced that he was sending his famous YouTube character, Blippi, on the road for a 30-city North American tour, fans who enjoy his childlike, yet educational persona were likely delighted. But now that it’s been revealed that John will not be reprising Blippi and that the character will be played by another actor, some people are livid.

Blippi, who has 5.7 million YouTube subscribers but whose videos for the preschool set can reach as high as 230 million views, announced this week the creation of Blippi Live!. It’s a tour so that people who love the man who dresses in orange suspenders, an orange bowtie, and a blue-and-orange hat and who teaches young children about farm animals and bulldozers can watch him in person.

But some fans are feeling ripped off because John won’t actually be playing Blippi. It’ll be somebody else.

As BuzzFeed reports, many people didn’t know John wouldn’t be there when they bought their tickets. One woman told the website she purchased three sixth-row tickets and two meet-and-greet passes to the Toronto show and spent about $400. When she discovered the original Blippi wouldn’t be in attendance, she said she would demand a refund.

On the Blippi Live! website’s front page, it doesn’t explicitly mention that John won’t be there. Instead, the website writes, “Stevin John is the creator of Blippi and acts as the writer and creative force behind the Blippi character. Now that Blippi has evolved as a character he is excited that a dynamic stage performer has been cast as Blippi to entertain and thrill audiences across all of the tour markets.”

The line of “a dynamic stage performer has been cast as Blippi” implies that John won’t be in attendance. But ticket buyers would have to be really paying attention to understand that point.

In the website’s FAQ section, one question asks “Will Stevin John be in the live show?” The answer is, “Blippi was always envisioned as a character. Stevin John is the creator of Blippi and acts as the writer and creative force behind the Blippi character. Now that Blippi has evolved as a character he is excited that a dynamic stage performer has been cast as Blippi to entertain and thrill audiences across all of the tour markets.”

In an interview with Billboard before the controversy began, John made it clear, saying, “I won’t be on the road, but I am obviously extremely involved with the whole process. Blippi is as a character and I’m the creative force behind it, but since YouTube is a monster and all of these platforms are really crazy I can’t go on the road for many weeks or months at a time.”

It’s not exactly that John is hiding the fact he won’t be playing Blippi on this tour. It’s just that some ticket-buyers didn’t know it at the time they plunked down their money. Stephen Shaw, the producer and promoter of the live show, told BuzzFeed “we felt we made the announcement abundantly clear.” But he also said the tour would send out letters to those who bought tickets to remind them that John won’t be there and offer them a refund if they’re unhappy about it.