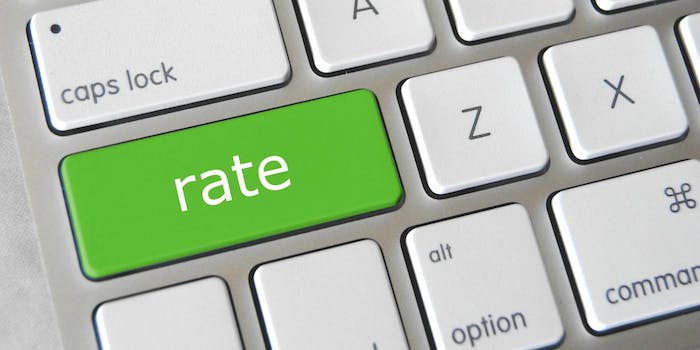 Photo via GotCredit/Flickr (CC BY 2.0)

After avalanche of criticism, CEO of Peeple tries to make it ‘positive-only’ app

Everyone hated the app before. No one will use it now.

If the “Yelp for people” app Peeple were still available, the app’s creators would get a lot of one star reviews. But Peeple’s CEO and co-founder has not enjoyed the negative attention, and now she’s attempting to use the experience to pivot Peeple to a positivity-only app.

In a blog post on LinkedIn, Julia Cordray wrote about the response her app has generated. Spoiler alert: It has been bad. So bad, in fact, that she said that there have been “death threats and extremely insulting comments aimed at me, my investors, and my family on almost every social media tool possible.”

That sounds like the Internet we all know and hate, of course, and any sort of threat should be considered unacceptable. Cordray is using the experience to explain how Peeple can solve the type of negativity that was directed at her.

“Here’s the catch. I can’t delete any of them. They are there forever for the world to see,” she wrote of the comments. “That’s why Peeple is focused on the positive and ONLY THE POSITIVE as a 100% OPT-IN system.”

Cordray wrote that no one will be able to join the platform without providing explicit permission, a change from the app’s previous model, which allowed anyone to add a person to the database as long as they had the person’s phone number.

The new, smiling version of Peeple is also doing away with the 48-hour waiting period for negative comments. Instead, Cordray explained, “There is no way to even make negative comments. Simply stated, if you don’t explicitly say ‘approve recommendation,’ it will not be visible on our platform.”

This would seem to defeat the whole premise of Peeple, the initial idea for which was to treat humans like restaurants and rate them honestly on a five-star scale. Now there will only be positive reviews and people will be able to curate what reviews are posted. The new model undermines the (horrible) idea with which the app began. At best, the new version of Peeple is like LinkedIn’s Recommendations feature.

In her LinkedIn post, Cordray insisted that Peeple was simply misunderstood.

“This has always been a positivity app,” she wrote. “Peeple will not be a tool to tell other humans how horrible they are. Actually, it’s the exact opposite. Peeple is a POSITIVE ONLY APP. We want to bring positivity and kindness to the world.”

That appears to be the exact opposite of the sentiment that she previously expressed when discussing her app. In a now-removed YouTube video, she explicitly said that she “wouldn’t want this app to just be positive.”

Cordray also denied suggestions that Peeple was a massive hoax. But since her LinkedIn post appeared, Peeple’s online presence has entirely disappeared. The @peepleforpeople Twitter account changed its handle to @peeplereviewapp and went private, the Facebook page now redirects to a page that says “this content isn’t available right now,” all but one video has been pulled from YouTube, and the website is offline.

Cordray concluded her LinkedIn post by telling readers to join Peeple to “be part of the positive revolution” and help create the “world’s largest positivity app.” Given that the company’s web presence is close to nil, it’s not clear how one is supposed to do that—and that’s probably for the best.