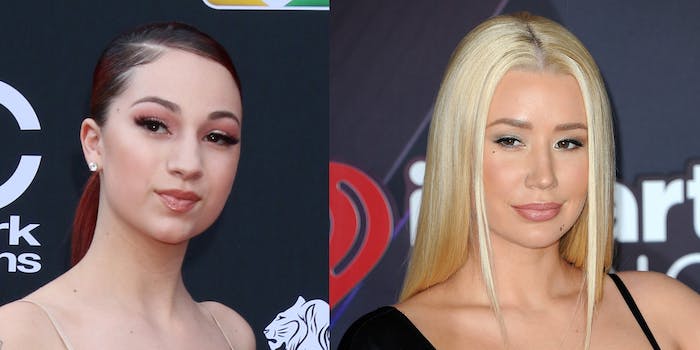 The drama continues on social media.

Bhad Bhabie, the rapper formerly known as the “Cash Me Outside” girl, threw a drink at Iggy Azalea at Cardi B’s Fashion Nova party late Wednesday. The incident was recorded and posted on the Shade Room’s Instagram.

In the video, Bhad Bhabie is seen walking toward Azalea before launching a drink her way. There’s some yelling, but it’s hard to make out what anyone is saying.

The feud apparently started online a few days ago after Azalea asked a friend if she was going to see Bhad Bhabie, born Danielle Bregoli, on tour. The 15-year-old rapper responded saying, “U should come. Would be a good memory for u of what a sold out show looks like,” seemingly taking a dig at Azalea’s recently canceled tour.

The fight didn’t end at the Fashion Nova party. The rappers took to social media to continue hashing it out.

“Bye broke bitch, bye ho. Glad you left with a bag because you certainly ain’t making money from music anymore,” Bhabie wrote on her Instagram story after the party. “It’s simple. Don’t talk all sorts of s*** on the internet n come up to me like u my friend. Some of these hoes like u fake n 2 faced as f*** but I’m NOT that b****.”

“I came to get a check. I left with a check. You left with your bags stuffed over there and you look silly. I’m not going to be scrambling around on the floor for a 15-year-old girl on the internet. I have to laugh. I don’t know. I just think people want clout really bad,” she said in her story. “Mama, good luck with your career. You’re young. You’re going to look back on this and you’re going to really feel dumb. I just think that s–t’s lame as hell, but maybe it’s ’cause I’m a grown-up.”

Azelia wasn’t done, though. She later took to Twitter to continue going off on Bhabie.

“Imagine me scrambling around on the floor in a dirty nightclub trying to hit a teenage girl. Girl. NO,” Azalea wrote. “I’m grown and will simply have you REMOVED and continue enjoying myself. #YouNotSpecial. Anything else from her mouth is ignored – it’s too preschool for me.”

“Now y’all saw the video I’m sure you understand why I spent the rest of the night laughing and unbothered by that foolishness,” Azalea wrote in another Tweet today.

Something tells me this feud is far from over. We’ll be waiting to see how this drama unfolds.