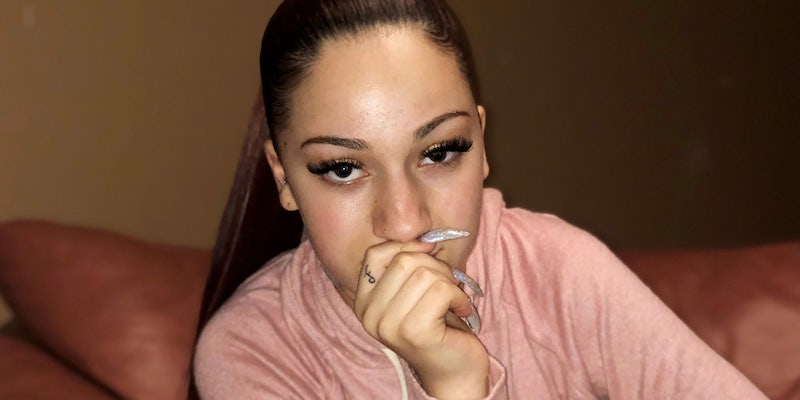 Bhad Bhabie is all about a Kanye West collaboration

Ever since she blasted into the public eye in 2016 with her viral Dr. Phil interview, Danielle Bregoli, aka the “Cash Me Ousside” girl, has proven her critics wrong by carving out a legitimate rap career as Bhad Bhabie. She scored a gold single with 2017’s “Hi Bich,” and she worked with Lil Yachty and Ty Dolla $ign. Now she’s got her sights set on an even bigger rapper for a future collaboration: Kanye West.

Talking to TMZ on Thursday before her sold-out show at the Roxy in Los Angeles, Bregoli said West’s new music—including his eighth solo album, ye, released this month—has her inspired to potentially collaborate.

“I listen to old Kanye, but some of the shit Kanye has now makes me kinda want a Kanye collab,” she said, making no mention of the fact that she was less than a year old when West dropped his debut album, The College Dropout. “Low key, I ain’t gonna lie, Kanye’s cool. Now he is, I think. Before, I was skeptical about Kanye, but hey, maybe I want a Kanye collab.”

West and Bregoli apparenlty have no public plans to collaborate at the moment, but given West’s penchant for spotlighting young talent—21-year-old rapper 070 Shake makes several key contributions to ye—it doesn’t seem outlandish to imagine him putting the “These Heaux” MC on a track in the future.

Just this year, Bhad Bhabie has collaborated with Lil Yachty on “Gucci Flip Flops,” which hit No. 79 on the Billboard Hot 100, and Ty Dolla $ign on “Trust Me.” She revealed to TMZ that she “definitely still [wants] that Travis Scott collab.” With tens of millions of Spotify streams and a massive record deal with Atlantic Records, Bhad Bhabie doesn’t seem like the type to take “no” for an answer.