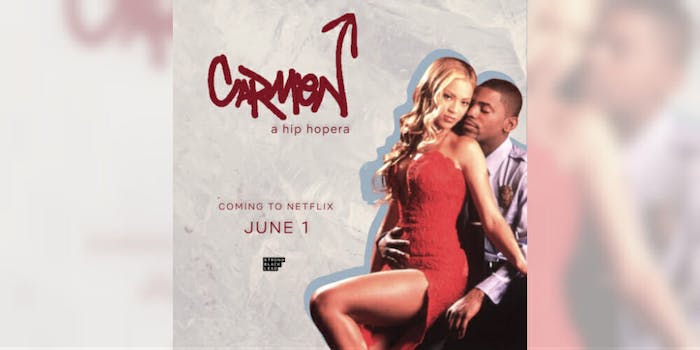 Get ready, Beyhive: Beyoncé’s debut film is coming to Netflix

'Carmen: A Hip-Hopera' hits the streaming platform on June 1.

One of the most iconic hip-hop films of all time will make its way to Netflix on June 1, and no, it’s not Get Rich or Die Tryin’. It’s Carmen: A Hip-Hopera, and it stars no other than the queen herself, Beyoncé Knowles.

The film, which was supposed to be a modern take on the 1954 classic musical Carmen Jones, was the superstar singer’s debut film. It’s hard to imagine now, but Beyoncé still had to go by her first and last name be to recognized at the time.

The film also stars Mekhi Phifer, Lil’ Bow Wow, Wyclef Jean, and Jermaine Dupri, in what has become a cult classic and must-see for any true member of the Beyhive.

Carmen: A Hip-Hopera has been nearly impossible to find, so it’s safe to assume most of Beyoncé’s newer fans have yet to see the star in her debut role. But, this is perhaps one of the biggest pop culture moments of the year for those who watched the film —or recorded it on their VCRs—when it first came out.

In fact, Twitter went into a frenzy when Netflix announced the film’s return, nearly 18 years after its initial release.

Ok before Carmen: A Hip Hopera comes back to us via @netflix I want you to know that we are not here for your critiques!

We KNOW it's not an award winning film. We love it anyway! We are here for the nostalgia! The cast! The songs! The ridiculous drama of it all!

Now, young members of the Hive—as in, those who came during the era of her other iconic film Obsessed—will now be able to relive the very beginning of the superstar’s career before Beyoncé Knowles became, well, Beyoncé.