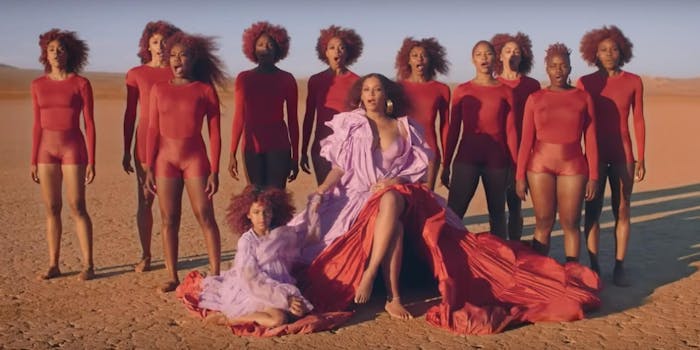 The trademark dispute is on.

Someone is learning the hard way to never mess with Queen Bey.

But there is only one person in her way, and that’s Morales, who is claiming that she has been using the name Blue Ivy since before Blue Ivy Carter was even born and that people might confuse her wedding company with the  Beyonce’s 7-year-old.

The case is now scheduled to go to trial.

In court documents, Queen Bey argues that her trademark filed is for the name “Blue Ivy Carter,” not the name “Blue Ivy” and that people are unlikely to confuse the young “cultural icon” with an unknown boutique.

“That consumers are likely to be confused between a boutique wedding event planning business and Blue Ivy Carter, the daughter of two of the most famous performers in the world, is frivolous and should be refused in its entirety,” Beyoncé’s claim reads.

Queen Bey also went on to say that, “the presence of the word ‘CARTER’ ties the commercial impression of BGK’s Mark to the celebrity Blue Ivy Carter rather than Opposer’s regional event planning business.” She also went on to note that Morales has a “small business, with just three regional offices and a handful of employees” and poor social media presence.

Blue Ivy Carter, on the other hand, is a celebrity in her own right. She just earned her first Billboard 100 placement for the song “Brown Skin Girl,” and there is an Instagram account dedicated to her that already has over 160,000 followers. She walked the Lion King red carpet with her mother and appeared in her mother’s music video for the song “Spirit,” where she stole the show.

She was also seen in Beyoncé’s critically acclaimed Homecoming documentary as a dancer and creative director.

As for Morales, well, she owns a company that sells wedding dresses. And as for who is the bigger “cultural icon—it’s now up for the courts to decide.