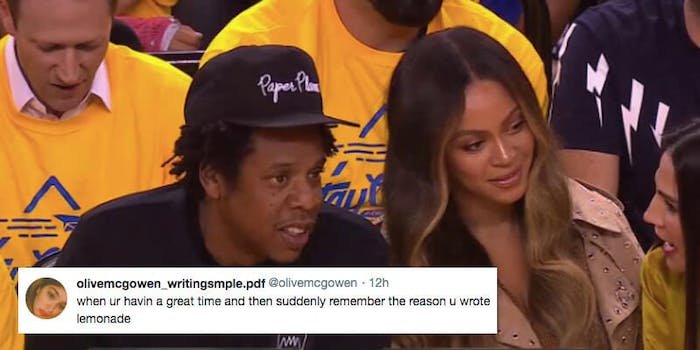 Did we learn nothing from Becky?

If one day you find yourself sitting next to Beyoncé, at a gala, at a sporting event, or even on a freaking bus, you need to recognize it for the outstanding honor it is. Most of the world probably knows this, but the woman who had the pleasure of being seated next to Queen Bey at the NBA Finals last night clearly missed the memo.

Nicole Curran is the wife of the owner of Golden State Warriors owner Joe Lacob, and now the object of ire and mockery from members of the Beyhive everywhere. ESPN captured a moment between Curran, Beyoncé, and Jay-Z during the game in which Curran thought it was a good idea to lean over Bey to try to talk to her husband. And by all appearances, one of music’s leading ladies did not take this intrusion too well.

Jay-Z and Beyoncé are courtside for Game 3 😎 pic.twitter.com/6mmJuN8Odn

Sure, it’s entirely possible Beyoncé was reacting to something else and not this woman creeping in on her space and her man, but there is exactly 0% fun in imagining that, and 110% fun in blowing this up all across the internet. Math!

And obviously, it didn’t take long for the Beyhive to respond, slamming bee emojis down all over Curran’s Instagram (where she has since disabled comments) and sharing their horror at the scene playing out in front of them.

I would leave the earth if Beyonce looked this ready to smack me https://t.co/Yaf4JKeMhN

Would you lean over Beyoncé for a Billion dollars!?!? https://t.co/si387vUSLb

Becky with the sparkly boots. https://t.co/6XYwpSv8px

And Beyoncé definitely fanned the fire when she posted a video of them at the game later…and cut Curran out of it entirely.

The pettiness is real, and we wouldn’t have it any other way!

when ur havin a great time and then suddenly remember the reason u wrote lemonade https://t.co/dJPf1ZxlxC

“Don’t talk to my husband” https://t.co/2Rdl1NnWCB

WE GOOD ON EVERY MLK BOULEVARD … https://t.co/t1rPeLUWFR

As it goes with someone as simultaneously self-controlled and expressive as Beyoncé, it was inevitable that this moment would evolve into something so meme-able. And this one may stick around for a while…those expressions are absolutely priceless.

Beyoncé: out here blessing us with new content even when it’s not music, and even when she doesn’t mean to. What did we do to deserve her?