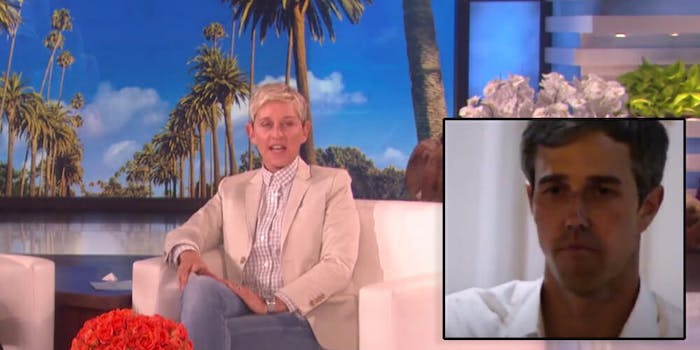 Ellen, LeBron, and even Lance Armstrong are all in.

Ellen DeGeneres, LeBron James, and several other major celebrities are gushing over Texas Democratic Senate candidate, Rep. Beto O’Rourke, after his response to a question about protesting NFL players went viral this week.

O’Rourke’s stance on NFL players protesting during the national anthem came in response to a question at a recent town hall. The U.S. Representative for Texas’ 16th congressional district was asked by a young man whether he found the national anthem protests disrespectful.

The 45-year-old Senate hopeful responded that he can “think of nothing more American” and discussed several peaceful protests throughout our country’s history that compared to the NFL players taking a knee together.

‘I can think of nothing more American.’ — Beto O'Rourke — the man taking on Ted Cruz — brilliantly explains why NFL players kneeling during the anthem is not disrespectful pic.twitter.com/bEqOAYpxEL

The video gained momentum after O’Rourke’s adversary in the upcoming election, Sen. Ted Cruz, recently commented on it during a campaign stop in Corpus Christi, Texas.

“When Beto O’Rourke says he can’t think of anything more American, well I got to tell you, I can,” Cruz said.

James, Ellen, and others rushed to support O’Rourke and retweeted his statement to their millions of followers.

Have him on your show!

Fellow Texans Lance Armstrong and NFL star Arian Foster are likewise showing public support for O’Rourke. Foster appeared with O’Rourke at a rally on Thursday, and later that night Armstrong made a bold Twitter endorsement: “[M]y fellow Texans, we have a choice. This guy or @tedcruz. It’s time for reasonable and balanced talk on ALL issues – here’s one snippet. WE are for @BetoORourke!”

Parkland parents and NBC directors are also on board.

According to the Hill, O’Rourke has not yet confirmed whether he plans to appear on The Ellen DeGeneres Show.