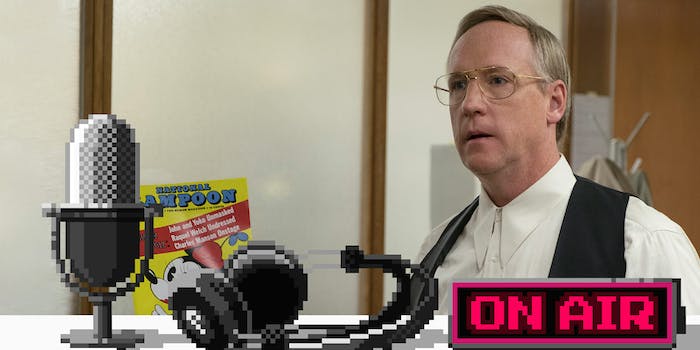 It's all about dystopia, baby.

This week on the Upstream podcast, we talk about our holiday binging, the anti-Semitic undertones in Netflix’s A Christmas Prince, and whether The Last Jedi was good. Also: We run down 10 of the streaming originals we’re excited about in 2018 and get confused about Sarsgaards and Skarsgårds.

Listen to our podcast here and jump into the list below.

The name might make you think it’s one of those docs about the depravity of food processing, but Rotten is more like an investigative series about food. The six episodes, from Anthony Bourdain’s production team, explore how honey became part of a “honey laundering” scheme, the body count of food allergies, and more.

Master of None’s Lena Waithe created and executive-produced this series about life on Chicago’s South Side, which goes beyond the violence to paint a picture of the interconnected lives of its inhabitants. You’ll need Showtime to stream, but you can also watch the first episode free on YouTube here.

This 10-episode anthology series, based on the short stories of Philip K. Dick, has a kinship with Black Mirror. It also has a stacked cast, including Greg Kinnear, Steve Buscemi, Game of Thrones’ Richard Madden and Liam Cunningham, Bryan Cranston, and Essie Davis.

Adapted from a 2002 Richard Morgan novel, Altered Carbon envisions a future where physical bodies can be discarded but memories can be stored forever—ideally. Joel Kinnaman (Suicide Squad) plays Takeshi Kovacs, or rather, his “sleeve,” the term for mortal coils in this technicolor dystopia.

Developed with Super Deluxe and produced by Sundance Now, This Close follows the lives of Michael (Josh Feldman) and Kate (Shoshannah Stern), two friends who are struggling with life and love, and just happen to be hearing impaired. Marlee Matlin and Cheryl Hines also star.

A dramatic adaptation of Lawrence Wright’s Pulitzer Prize-winning 2007 book on Al Qaeda and the lead-up to 9/11, The Looming Tower features Peter Sarsgaard as CIA analyst Martin Schmidt and Jeff Daniels effectively revisiting his Newsroom character as FBI special agent John O’Neill, who assisted in the tracking of Osama Bin Laden and died in the World Trade Center collapse on 9/11. Alec Baldwin pops in as George Tenet and Alex Gibney executive produces the series, which is Hulu’s first real take on American political drama.

Hulu and BBC One partner for this detective series from Luther creator Neil Cross. Agyness Deyn and Jim Sturgess star as detectives struggling with morality and corruption in a world on the verge of an apocalypse.

It’s been a bit of a wait for season 2 of the Marvel series—we had to wade through The Defenders first—but it’s going to be worth it. At the end of season 1, Jones murdered her abuser, Kilgrave (David Tennant), but she’ll likely have to confront him again, as well as new villains.

Details are still forthcoming, but the Emmy-winning series will return to Gilead in season 2, and star Elisabeth Moss has said that it “is going to be bad too, really dark.” So try to mentally prepare for that.