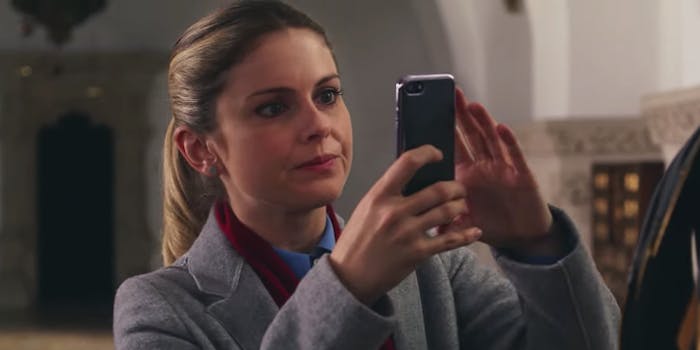 Ah, the holidays. A nice time to curl up on the couch with a mug of hot chocolate, your favorite sweater, and watch… A Christmas Prince 18 times in a row?

Netflix released the new original movie—about a reporter who goes undercover and ends up falling in love with a prince—less than a month ago, and it seems to have a specific, dedicated fanbase. Maybe it’s the Meghan Markle mania that has descended upon us, maybe it’s a bunch of dentist waiting rooms that are just playing the movie on repeat, but according to a tweet the streaming company sent out Sunday evening, 53 of its 109 million users have watched the rom-com every single day for the past 18  days:

To the 53 people who've watched A Christmas Prince every day for the past 18 days: Who hurt you?

“Who hurt you?” the streaming giant wrote.

At first, fans seemed tickled by the tweet, but for a company that’s notoriously private about its metrics and internal numbers, people couldn’t help but pick up on a certain “Big Brothery” vibe to how (and why) it shared the information.

“What could a company even do with my data?” https://t.co/njUbfv5AkU

Netflix is watching you like Santa. Netflix knows if you’ve been bad or good and that’s why you’re getting a second season of “The OA." https://t.co/Z9WY6fh5Qs

Writer Amanda Bell tried to get a quote straight from the horse’s mouth late Sunday, asking the company why it was “calling people out like that.”

“I just want to make sure you’re okay,” Netflix replied.

I just want to make sure you're okay

When Bell countered with, “You’re not my mom,” the company fired back with, “Ok sweetie.”