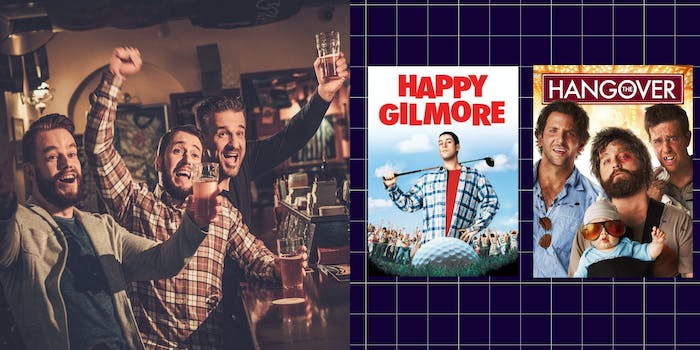 The best movie drinking games and where to stream

Did someone say fetch?

When it comes to making plans with friends, everyone enjoys a good movie night. You can add some extra excitement to this classic pastime by turning your favorite movies into drinking games. Almost any movie can be adapted into a drinking game if you’re willing to get creative enough, but we’ve selected ten of the best movies that are particularly up for the challenge. Remember, drink responsibly!

The best movie drinking games for your next night in

Gather up your girls and find out who’s Queen Bee. Losers go in the Burn Book. Take a sip every time:

May your fate not be the same as the characters in this classic comedy by the time you’re done with this game. Drink every time:

If you haven’t re-watched Twilight since your adolescent years, round up your Team Edward and Team Jacob pals and settle in for an alcohol-infused trip back in time. Take a sip when:

Our favorite rom-com heroine loves a glass of wine as much as the rest of us. Get the bottles out and prepare to follow along with Bridget Jones’ misadventures. Take a drink every time:

Nothing says the holidays are here like putting on Love Actually. Of course, there’s nothing wrong with enjoying this rom-com during the off-season, too. Whether you’re spiking the eggnog or having a wine night, you can play the Love Actually drinking game by following these rules:

You don’t have to be a child to enjoy a classic Disney animated movie. Next time you have a movie night with your fellow Disney stans, try this game. Make sure you put the kids to bed [email protected] Drink every time:

Some may say that the only way to enjoy an Adam Sandler movie is while you’re intoxicated. Whether you agree with that or not, this game definitely adds some extra fun to Sandler’s shenanigans. Take a sip when:

The Marvel universe is vast – and so are its opportunities for playing movie drinking games. Invite your fellow The Avengers fans over, and get drinking. Take a drink every time:

If nature documentaries are your favorite films to stream, then this is the best movie drinking game for you. Drink when:

Whether you’re currently living out your college glory days or you’re simply nostalgic for them, National Lampoon’s Animal House is the perfect movie for getting in the collegiate spirit. Crack open some beers and get playing. Drink each time: