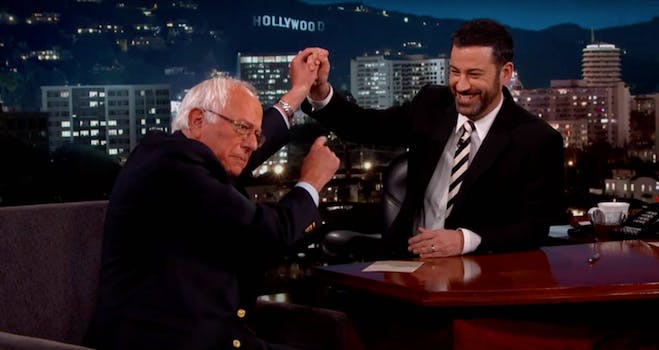 He appreciates Trump's concern, but he won't run as a third-party candidate.

On Wednesday night, Donald Trump floated the idea of debating Bernie Sanders on TV. It was reportedly a joke, but a day later, the independent Vermont senator is still up for that debate.

“You made it possible for us to have a very interesting debate about two guys who look at the world very very differently,” Sanders told Jimmy Kimmel on Thursday night.

In an interview that was more policy-focused than Trump’s conversation the previous night, Sanders discussed the upcoming California primary, the state with the largest amount of delegates up for grabs, and the idea that former Secretary of State Hillary Clinton already has the Democratic nomination locked up because of the superdelegates who pledged to vote for her.

Compared to other Sanders interviews, it’s nothing groundbreaking, but it’s definitely a huge contrast to Trump’s time on Kimmel’s couch the night before.

For one, Sanders has a very distinct personal opinion on the transgender bathroom laws.

And when he’s asked what he’d be doing for his 28th wedding anniversary, Sanders paints a romantic picture of a groundbreaking political rally. We hope there’s also dinner scheduled at some point.

While Trump may empathize with Sanders over how they were treated by their respective parties, Sanders “appreciates” Trump’s concern when asked if he’d run as an third-party candidate.

But no, Sanders told Kimmel, he’ll be running against him as the Democratic nominee. It’s up to the voters now.