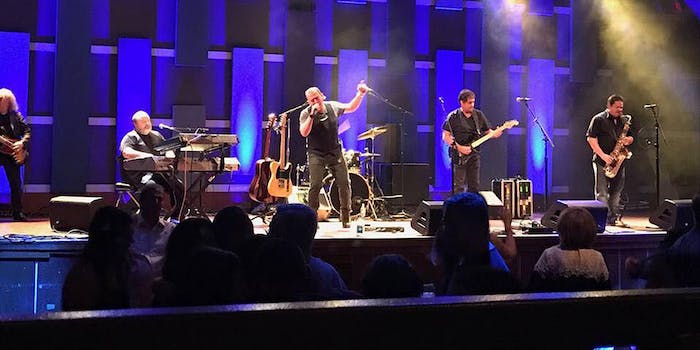 The B Street Band is out.

A Bruce Springsteen cover band has bowed out of this week’s Garden State Presidential Inaugural Gala.

The B Street Band lit up social media last week, after it came to light that the group would be playing the event. It performed at the same event in 2009 and 2013 for President Obama as well, but the band’s founder, Will Forte (not the actor), reached out to Springsteen news site Backstreets saying the B Street Band would be “withdrawing” from the event:

With deepest apologies to our fans and the New Jersey Inaugural Ball committee, the B Street Band is withdrawing from performing at this year’s inauguration Gala.

Our decision is based SOLELY on the respect and gratitude we have for Bruce and the E Street Band.

Bruce’s music has been the foundation of our livelihood. The B Street Band would not exist without the talents of Bruce and our E Street brothers.

We are most grateful to these rock legends and look forward to many more years of emulating and performing the Forever Music, of Bruce Springsteen.

Before the election, Springsteen called Trump a “flagrant, toxic narcissist” in an interview with Channel 4. Speaking with Rolling Stone last week, Forte said the group agreed to perform at the event in 2013, way before our current hellscape was reality.

This adds to a long list of surreal inauguration news: Last week it was announced that fake Coachella poster lineup 3 Doors Down and Toby Keith would be playing the inauguration event in D.C., but those Flo Rida rumors were bunk.