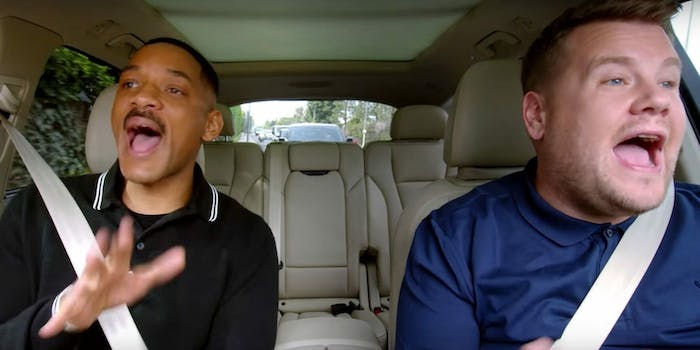 The Cupertino-giant needs to find a way to get its show back on pitch.

Apple appears to be having some problems getting its first video series off the ground.  The Cupertino giant purchased the rights to the immensely popular The Late Late Show with James Corden segment Carpool Karaoke last year. The 16-episode weekly spin-off was initially set to debut in April, but CBS and Apple are now giving a less-reassuring “later this year” deadline.

The revised launch date comes after a few uncharacteristic delays. According to Reuters, a March premiere party for Carpool Karaoke was postponed just days before it was going to take place. The same thing happened earlier this week, when Apple postponed the rescheduled party that was set for this Monday.

Carpool Karaoke became a runaway success after Corden began hosting The Late Late Night Show in 2015. Its premise is simple: Corden drives a celebrity around while they chat and sing along to the radio.  A number of the 15-minute segments have more than 10 million views on YouTube—a segment featuring Adele reached a staggering 155 million.

Corden will serve as executive producer for upcoming adaptation. Apple has yet to announce a new host for its online version, but a trailer released in February shows Corden in the drivers seat with Will Smith, while other segments show celebrities pairing up.

For those of you waiting anxiously for Apple to get into the TV space, there is still Planet of the Apps to look forward to. The Shark Tank meets The Voice TV series is set to launch this spring.