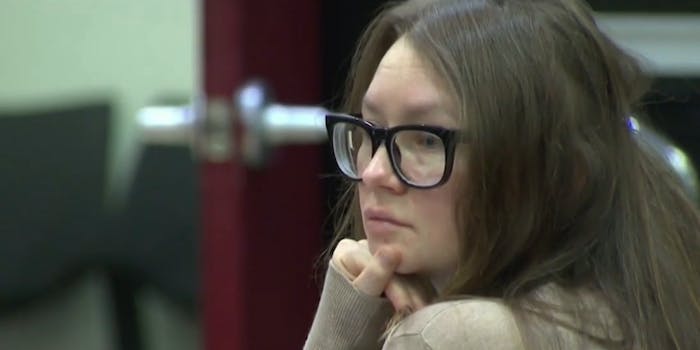 A New York City law named after a notorious serial killer has been invoked.

Anna Sorokin, the woman who posed as heiress Anna Delvey and grifted friends, associates, and businesses in New York City out of money and services, might not get to benefit from Shonda Rhimes’ upcoming Netflix series based on her life.

The 28-year-old was found guilty of grand larceny in April and sentenced to four to 12 years in prison. She told the New York Times in May that while she wasn’t sorry for what she did, she does “regret the way I went about certain things.” She claimed it wasn’t about money but power.

The saga is fertile ground for Rhimes, who picked up a Netflix overall deal in 2017 and set Sorokin’s story as her first project last year. But a 1977 New York state law named after serial killer David Berkowitz could disrupt any further money Sorokin receives from the deal.

According to the New York Post, the “Son of Sam” law has been invoked by the Attorney General’s office and would prohibit Sorokin from seeing “profits from a crime,” per Assistant Attorney General Adele Durand. Sorokin received $30,000 last year for the deal, though that went to lawyer’s fees. The Attorney General’s office is seeking to block current and future payments, including a $15,000-per-episode consulting fee and $7,500 in royalties. She also owes close to $200,000 in restitution to City National Bank.

The law prohibits convicted criminals from profiting off their stories and was previously applied to John Lennon’s murderer Mark David Chapman and Jean Harris, who was convicted of murdering Scarsdale Diet author Herman Tarnower.

Sorokin has still managed to capture the internet’s imagination while in prison—there’s an Instagram account dedicated to her “court looks“—though some of her courtroom behavior has been called out. A book by Rachel DeLoache Williams, one of the people Sorokin scammed, is out this week.