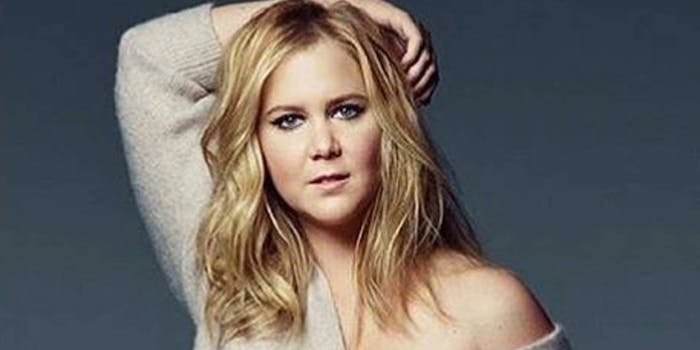 Amy Schumer just shut it down on Instagram. But this time it wasn’t for her groundbreaking comedy.

The actress addressed social media trolls that have a problem with her being cast as the lead in the upcoming movie, Barbie. Schumer is also writing the film.

After posting a photo to her Instagram account in her swimsuit, the comedian added a thoughtful, strong message for everyone who is shaming her size for “not fitting” the role.

Very very honored to be nominated for 2 Grammys and to be considered to play an important and evolving icon. Is it fat shaming if you know you're not fat and have zero shame in your game? I don't think so. I am strong and proud of how I live my life and say what I mean and fight for what I believe in and I have a blast doing it with the people I love. Where's the shame? It's not there. It's an illusion. When I look in the mirror I know who I am. Im a great friend, sister, daughter and girlfriend. I'm a badass comic headlining arenas all over the world and making tv and movies and writing books where I lay it all out there and I'm fearless like you can be. Thanks to everyone for the kind words and support and again my deepest sympathy goes out to the trolls who are in more pain than we will ever understand. I want to thank them for making it so evident that I am a great choice. It's that kind of response that let's you know something's wrong with our culture and we all need to work together to change it. Anyone who has ever been bullied or felt bad about yourself I am out there fighting for you, for us. And I want you to fight for yourself too! We need to laugh at the haters and sympathize with them. They can scream as loud as they want. We can't hear them because we are getting shit done. I am proud to lead by example. "I say if I'm beautiful, I say if I'm strong. You will not determine my story. I will" #thegirlwiththelowerbacktattoo

This woman is not going to let society decide what is and is not the perfect body. More power to you!