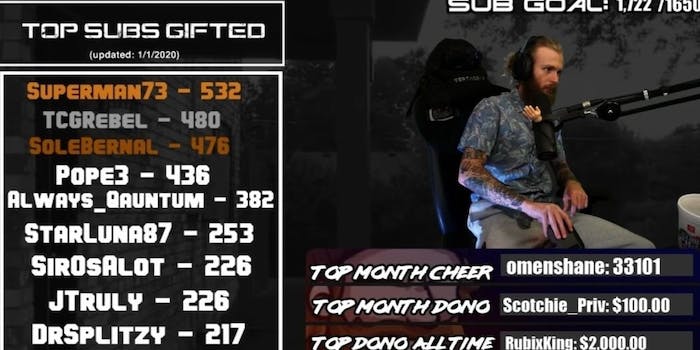 This Twitch streamer pooped his pants during a broadcast

For those who would like to see another take on PewDiePie’s poop-inspired video game that was recently banned by the Apple Store, a Twitch streamer gave his viewers the live-action version.

Twitch’s American Dad apparently thought it’d be a good idea on a recent broadcast to put his mic in the vicinity of his butt so it could catch the sounds of him expelling gas. Cleverly, American Dad called this the “fart mic.” Unfortunately for him, the mic caught a little more action than he originally intended.

Or so he said in the immediate aftermath.

That’s because American Dad, who has about 38,000 Twitch followers, claimed to have accidentally pooped his pants.

If you can stomach it, here’s the video (and audio!) of the scat-tastic moment of truth. Nearly 400,000 people have watched the clip since it was recorded.

Unfortunately for viewers of Twitch, pooping oneself while broadcasting isn’t as rare as you might like to think.

As one redditor wrote, “If you haven’t shit yourself on stream, can you really call yourself a streamer? I swear… 4 year olds shit themselves less than these people.”

The day after his apparent accident, American Dad provided an update on Twitter.

Taking the night off.
Got some stuff to take care of tomorrow.

Lots of cool shit is gonna be happening soon… #StickTight

“Taking the night off,” he wrote. “Got some stuff to take care of tomorrow. Lots of cool shit is gonna be happening soon…”

Hopefully, he means that last line metaphorically and not literally.