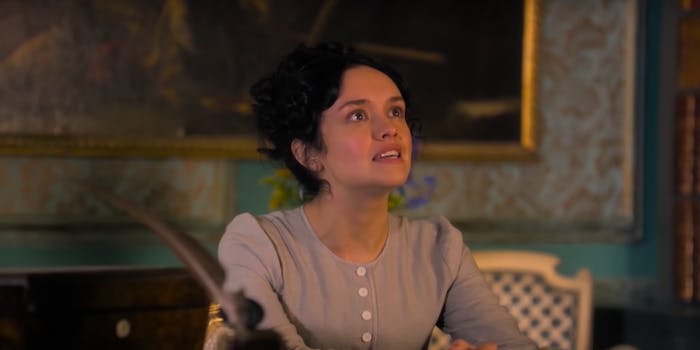 If only for its wonderfully despicable protagonist, Becky Sharp.

While Amazon’s new take on Vanity Fair could never be as incendiary or innovative as William Makepeace Thackeray’s original masterpiece, it makes a good choice for an adaptation, following in the footsteps of other literary classics such as War & Peace and Les Misérables. And yet, the very qualities of Vanity Fair that would seem to make it more of the same are also the qualities that make it unique.

Like other epic tomes of its era, Thackeray’s chronicle of Napoleonic England contains a sprawling narrative involving star-crossed lovers, separated and thrown back together by fate, time, and coincidence. The difference is that Vanity Fair pokes fun at these narratives as much as it props them up. The two main storylines in Thackeray’s opus offered both the romance and battles that audiences expected in popular serials (the format in which Vanity Fair was initially published) of the time, while also critiquing the ridiculous contrivances of them. In essence, Thackeray got to have his cake and eat it, too.

Vanity Fair is also significant for being the first notable piece of western literature to contain an “unlikable” female protagonist: Rebecca Sharp, a wonderfully despicable character who lies, cheats, steals, hates being a mother, and, it is implied, murders a man for his life insurance. Olivia Cooke imbues Becky with much of the tenacity she has in the book, as writer Gwyneth Hughes and directors James Strong and Jonathan Entwistle take their version of the character right up to the line of irredeemable without ever fully crossing it. This adds a new sense of depth to her character, but it also demonstrates how ahead of its time the book was— even in 2018, producers knew the whole murder thing was going to be a hard sell.

Michael Palin also stars as Thackeray, appearing during the opening credits of every episode to say basically the same thing and wink at the camera. But besides these appearances and a few moments of fourth wall breaking from Cooke, Vanity Fair plays like a standard literary adaptation with more contemporary music. (Madonna’s “Material Girl” is a nice touch.)

Simon Russell Beale and David Fynn bring both foolishness and pride to the father-son duo of Misters John and Jos Sedley. Buffy the Vampire Slayer’s Anthony Stewart Head is delectable in the small but pivotal role of Becky’s most aggressive admirer, Lord Steyne. Claudia Jessie plays Becky’s foil, Amelia Sedley, with more range than the character actually has in the book, as does her long-suffering love interest, Major William Dobbin (Johnny Flynn). That said, when the two characters do finally come together in the end, the moment is so sentimental that even Thackeray would do a spit take.

Those looking for a feminist take on the story will be able to find that, too. Despite what you may think of her, Becky Sharp (“Sharp in name, sharp in tongue,” as one character puts it) is a pioneer. She lives in an era where women are required to be seen by men to be seen as anything. But she’s determined to take power in that and employ her sexuality to her advantage, even if she does it to the detriment of other women. “The days are gone when it was possible to live your whole life as a girl,” she tells Amelia.

Yet Becky is also aware of the injustice of having to rely on men for social clout. “I have brains and talent. Should be enough,” she complains. “In another world, perhaps,” the wife of one of her suitors responds. If nothing else, Becky is progressive in her willingness to take charge of her situation, to always possess her own agency. “Your soul is black with vanity,” she’s told at one point. “But you won’t forget me though, will you?” she responds. “It’s so boring when I’m gone.”

Thackeray described Vanity Fair as “a novel without a hero,” but that’s not exactly true. Becky Sharp is the story’s villainous heroine through and through. And while Becky seems less unique today, Amazon’s Vanity Fair is still worth watching, if for no other reason than to consider how original she would’ve seemed in Thackeray’s 1848 epic.